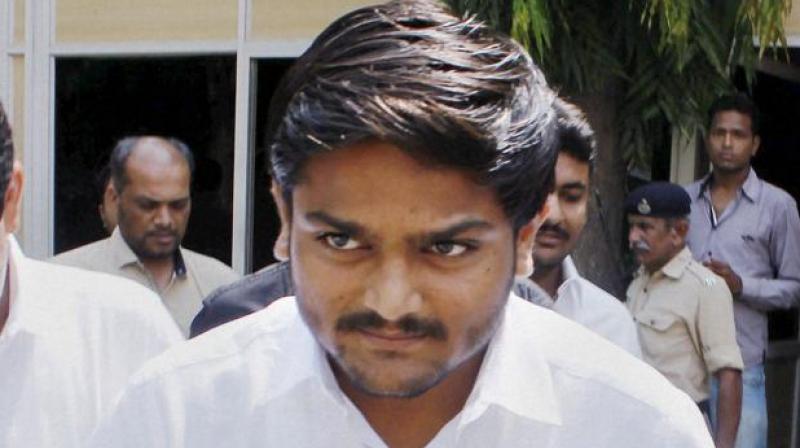 Varun and Reshma Patel, aides who joined BJP, were among the prominent faces of the Hardik Patel-led Patidar Anamat Andolan Samiti (PAAS) and remained critical of the ruling BJP during the agitation. (Photo: PTI)

The development came hours after state Congress president Bharatsinh Solanki invited Hardik Patel to join hands with the party. Solanki even promised to give an additional 20 per cent reservation to economically backward classes in the state if the Congress is voted to power in the upcoming Assembly polls.

Varun and Reshma were among the prominent faces of the Hardik Patel-led Patidar Anamat Andolan Samiti (PAAS) and remained critical of the ruling BJP during the agitation.

They joined the BJP after a meeting with Gujarat Chief Minister Vijay Rupani, Deputy Chief Minister Nitin Patel and state party chief Jitu Vaghani during its parliamentary board meeting, which was also attended by BJP president Amit Shah.

Read: Will work to defeat BJP if reservation not granted to Patel community: Hardik Patel

After joining the BJP, the Patidar leaders told reporters that Hardik has become a "Congress agent" and were trying to use the agitation to overthrow the present state government.

"Our agitation was about getting reservation under the OBC quota, not about uprooting the BJP and bringing the Congress to power. While the BJP always supported the community and accepted a majority of our demands, Congress is only trying to use Patels as a vote bank. We do not want to be part of such malicious conspiracy," Reshma Patel said.

"This agitation was not of Hardik Patel's alone. He is now acting like a Congress agent. I and Varun are of the opinion that the BJP would definitely fulfil our demands," she said.

According to Varun Patel, the Patidar community will never allow the Congress party to take over the reins of Gujarat by inciting Patel youths.

"The BJP government (in the state) held talks with us in the past to resolve various issues. However, the Congress never held such talks, as they were not committed. We have decided to join BJP because we do not want to run the agitation by becoming Congress agents," said Varun Patel.

"The BJP government even promised us to represent the issue of reservation to the OBC Commission. BJP leaders also promised us to provide legal help in case we want to take up the matter with the Supreme Court," he added.

Unfazed by the announcement of his key aides, Hardik Patel said in a tweet that he will continue to fight for the people.