After talks with the officials of the ministry of agriculture broke down on Friday evening, farmers had decided to continue with their march. 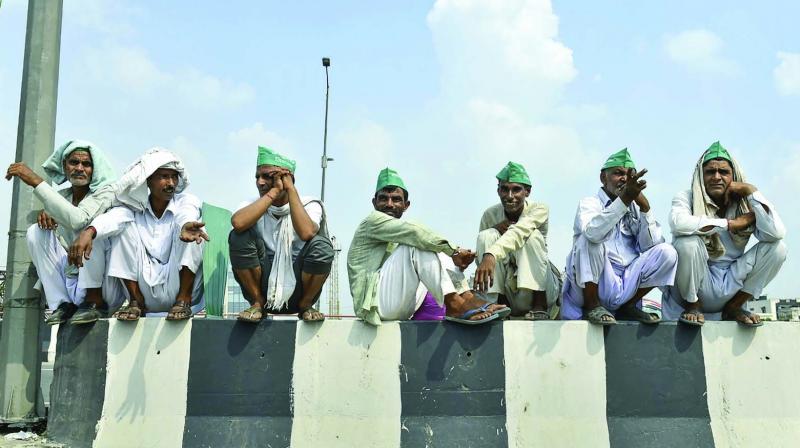 Farmers block the highway during their stir in Ghazipur border on Saturday. (Photo: PTI)

NEW DELHI: The farmers who had laid siege to the UP-Delhi border ended their stir on Saturday evening after the authorities agreed to five of their 15 demands.

Senior Bhartiya Kisan Sangathan (BKS) leader Lalit Rana, who was part of the delegation, met agriculture joint secretary Vivek Agarwal. Mr Rana said that the government has accepted to ensure payment of the dues of sugarcane crop within 14 days and has agreed to write to the UP government to increase the daily payment for cow maintenance.

Mr Rana claimed the official also agreed to start a campaign to make Hindon and Kali rivers pollution-free. “Also, we have been told that farmers will have a greater say in deciding the minimum support price of crops.”

Mr Rana said the movement would continue and that the BKS would keep a close watch on the promises made by the government. The farmer were carrying a list of 15 demands, including the formation of a commission on the lines of the Swaminathan Committee report. The MS Swaminathan Committee has recommended the government to provide 50 per cent profit over and above the cost of production to farmers.

Earlier on Saturday, hundreds of farmers from different districts of Uttar Pradesh camped on NH 9 after the state police stopped them from moving towards Delhi at UP gate on the Delhi-Ghaziabad border.

The farmers were demanding raise in the minimum support prices of crops, complete farm-loan waiver, reduction in the rates of electricity used for agriculture and implementation of the Swaminathan Report.

After talks with the officials of the ministry of agriculture broke down on Friday evening, farmers had decided to continue with their march. They, however, accepted the request of the local administration and left their tractors at the Transport Nagar in Noida where they gathered on Friday. Still, the UP police didn’t allow them to move beyond the UP gate.

The farmers had started their march from Saha-ranpur in Uttar Pradesh on September 11.