India   All India  22 Aug 2019  The story of Ustad Vilayat Khan in his own words: ‘Komal Gandhar’
India, All India

The story of Ustad Vilayat Khan in his own words: ‘Komal Gandhar’

Pandit Ravi Shankar too is written about, as are other musical legends. One hopes the book is translated into English as well. 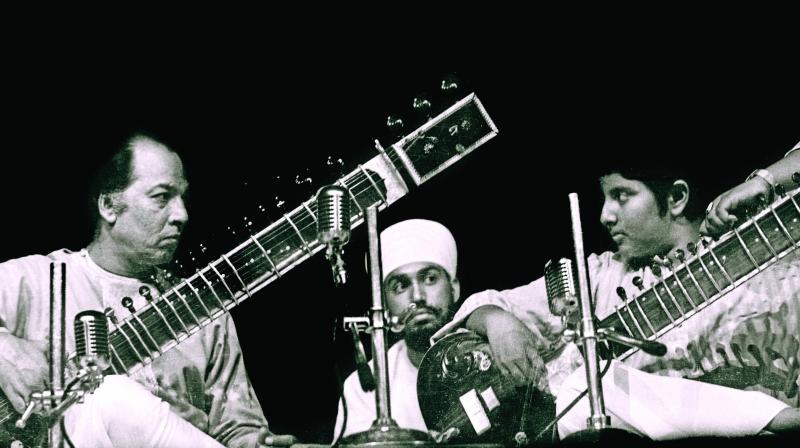 Ustad Vilayat Khan was born on August 28 — and even 15 years after his death remains one of the most influential figures in Indian classical music. Remembering him on his birth anniversary, one is overwhelmed with the magnitude of his legacy.

A lot has been said and written about him, but his own authorised autobiography, “Komal Gandhar”, as recounted to Shankarlal Bhattacharya, reveals facets of him that today may be forgotten. Recounted in Bengali over a series of recorded interviews, the book was first published in 2003. The eminent musicologist Meena Bannerji took it upon herself to translate it into Hindi in 2005 to reach a wider audience; she has added three chapters and notations of some of his compositions. The book is indeed a fascinating read, in which the maestro talks about all aspects of his life and music, including personal details of his loves, marriages and sons. Pandit Ravi Shankar too is written about, as are other musical legends. One hopes the book is translated into English as well.

The book poignantly opens with Ustad Vilayat Khan wondering why all his life he had wandered all over India. Tacitly acknowledging his restless nature and his need to run away, he traced his initial years in Kolkata, struggling in Delhi, finding a home in Mumbai, then Shimla, Dehradun and finally back to Kolkata. In Kolkata, he was unable to live in the ancestral home, so he acquired a house outside Kolkata. In his wistful words, “Park Circus wallah hamara ghar abhi bhi hai… khandaan barra ho gaya… kitni baar kaha ki contractors aa rahe hai… phir pata nahi, Imrat bhai (Ustad Imrat Khan, his younger brother) kaise kya sochte hain… koi kaam nahi bana”. (Our house in Park circus is still there, but our extended family is too big… I tried to hire contractors so often but brother Imrat changed his mind, nothing happened.) Sadly, Kolkata too was not to be his final resting place as he relocated to the US.

In the book, the Ustad mentions his birth year as 1928, making him a mere 10 when his father died, and only six when his father tied the “ganda” on him (the ganda tying ceremony is the official acknowledgement of lifelong discipleship) However, several friends of his remember him saying he was actually born in 1924, but he preferred to put his age forward by four years.

He describes his first concert in 1936, where he played Raga Bhairavi — “Pehli baar Abba, Inayat Khan sahib, jo sher ki jaise nidar insaan the, hai hai, dekha ki nervous hain!” (For the first time that I saw Inayat Khan, that lion like fearless man was nervous.) In a humorous vein, Ustad Vilayat Khan describes how tabla doyen Ustad Ahmad Jan Thirakwa said he would accompany him, and Ustad Inayat Khan demurred modestly, feeling his child was way too young and junior, but Ustad Ahmed Jan, winking at his father, said, “Nahi, mein bajaaoonga, ye sambhal lenge!” (No, I will play, he will be able to handle me.) Ustad Vilayat Khan recalls with pride, “Kitne sundar andaaz mein bajaakar meri bajane kee pehli koshish ko yahan se wahan le gaye.” (How beautifully he enhanced my playing and took my initial effort to another level.)

Referring to his taalim, the maestro says the teaching was not as music is taught now — one could not question — raagdari was taught by inference, not spelt out. He was not taught conventionally, “Tihaai, taan, taal, gat… aise nahi sikhaaya jaata.” While playing Raga Sham Kalyan, his father would deliberately introduce phrases specific to Raga Kamod, and only later admit the difference, and ask him to figure out what was what. “Man se samajhna tha. Bajaate bajaate kahi ek aisa sur lagaaya Raga ki ek duniya hee saamne aa gayi… Ustad ke nazdeek taalim lekar agar ye na mila to seekha hee kya?” (Music was taught through the intellect. While playing, the precision of one single note could hint at another dimension of the Raga; if one is not able to get this while learning in close proximity to a master, then what indeed has one learnt?)

An interesting read is why he stopped singing professionally, which he loved. His mother, who was the biggest influence on him in achieving excellence, forbad him despite being the daughter of the renowned singer Ustad Bande Hassan Khan. As she said, “Koi doosri aurat hoti to tujhko sasuraal se churakar, apne mayke kee aur kheench le jaati, magar mera iman Inayat Khan par hai. Mein gavayeeya nahin, sitariya chaahti hoon.” (Any other woman would have pulled you away from your paternal legacy to your maternal; but that would have been disloyal to Inayat Khan. I wanted to produce a sitariya, not a vocalist.)

Ustad Vilayat Khan had no hesitation in acknowledging that he had acquired music from all over. On learning from several Gurus, he quotes his father saying “Beta, saari duniye ke Ustadoon ko apne pita kee see izzat doge to mein tumhari izzat karunga marne ke baad bhi.” (Son, if you are able to give the same respect to other greats as you do your own father, then I will respect you even after death.)

He saw very hard times financially and had to find his own feet in the world of music; “Aisa bhi hua hai kee Rs 3 ke liye raat bhar bajayaa hai, Saharanpur ke paas.” (I have even played all night, for a mere Rs 3; near Saharanpur.) Perhaps this is why till the end, he always demanded a higher fees than any of his contemporaries, as he proudly relates in the book.

The influence Ustad Amir Khan had on his music is well known — apparently this irked Ustad Vilayat Khan somewhat. In his words, “Agar mere baare mein ye kaha jaye, Amir Khan on sitar, to mein khilafat karunga… Unke liye kyun nahi kehte Vilayat Khan in gaana?” (If people say my playing is like Amir Khan on the sitar, I object. Why not say he is like a vocal Vilayat Khan?) Admitting that they were close friends and had lived together in Delhi and Saharanpur, in the same house, Ustad Vilayat Khan claims Ustad Amir Khan was a “gandaband” shishya of his maternal grandfather Ustad Bande Hassan Khan. He refers to their falling out when they never spoke to each other for eight years — in his words Ustad Amir Khan “was a supreme artist”.

Two artists who could make him cry with the beauty and grandeur of their music were his father and Ustad Abdul Karim Khan, and third was Ustad Faiyaz Khan. Saying he had never cried listening to Ustad Ali Akbar Khan, he says, “Agar woh chaahe, rula sakte hain.” (He could make one cry if he wanted.) He also admired Ustad Bismillah Khan as an instrumentalist. On his own music, he says wistfully, “Mujhe zindagi bhar bahut dard mila, dukh hee zyada aaya mere hisse. Andar samaya ye dard, baad mein suron mein ubhra.” (All my life, sadness has been my portion. I internalised this sorrow, and it emerged in my music.)

A traditionalist to the core, Ustad Vilayat Khan has this to say about fusion music, “Hindustani shastriya sangeet se aadmi nikal nahi sakta. Usme koi ghussa hee nahin to woh fusion bajaayega.” (No one who has properly absorbed Indian classical music can ignore its influence. If you don’t know it, only then can you resort to fusion music.) When we have so many traditional instruments of our own which can echo Indian sounds and culture, why introduce instruments like the guitar and mandolin? He wonders.

Sadly, the icon said he wanted to be buried in Delhi, next to Amir Khusrau, in Nizamuddin Auliya, but that was not to be, and he was buried in his beloved Kolkata.