India   All India  22 Aug 2018  Miraculous escape: In video, couple thrown off; bike skids for 300m with child
India, All India

Miraculous escape: In video, couple thrown off; bike skids for 300m with child

The accident reportedly took place on busy Bengaluru-Tumkur highway at around 3:30 pm on Sunday. 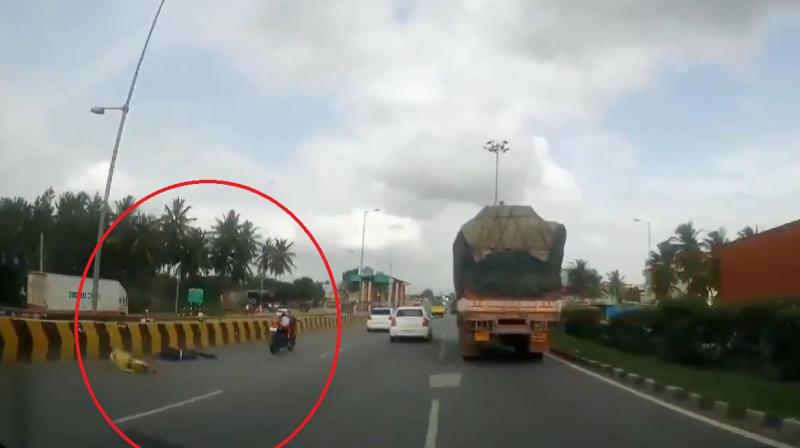 The bike miraculously did not hit a single vehicle and also narrowly missed a truck before slowing down and hitting the side divider where the child safely fell on the grass. (Photo: Twitter Screengrab)

Bengaluru: A five-year-old child had a miraculous escape after a Bengaluru family, travelling on a motorcycle, met with a horrifying accident on the busy Tumkur-Bengaluru highway. The couple was thrown off after the speeding bike hit a scooter while their vehicle kept moving between traffic with the child for around 300 metres.

The accident reportedly took place at around 3:30 pm on Sunday.

The escape was caught on the dash-cam of Karthik Gowda, who saw the whole accident, a report in NDTV said. The video of the incident has gone viral.

A Bengaluru cop, who handles the social media for the city police, also shared the video with a tweet, in which he listed the infractions the child's parents had committed: "speed, no helmets, overtaking from the left side and using mobile phones".

In the video, a couple is seen riding a bike with their child seated in front. The speeding bike rammed into another two-wheeler on the highway. The couple was thrown off the vehicle. However, due to the high impact of the accident, the bike rode between moving vehicles for nearly 300 metres without pause, with the child still in front.

The bike miraculously did not hit a single vehicle and also narrowly missed a truck before slowing down and hitting the divider where the child safely fell on the grass.

Soon, the onlookers rushed to the spot to rescue the child. The parents of the child and the man they hit suffered minor injuries and were treated in a private hospital in the area, reports said.