Madhya Pradesh: 4 men die as their car is swept away in Mandsaur

The deceased were trying to cross a flooded stream but the vehicle was swept away due to strong currents. 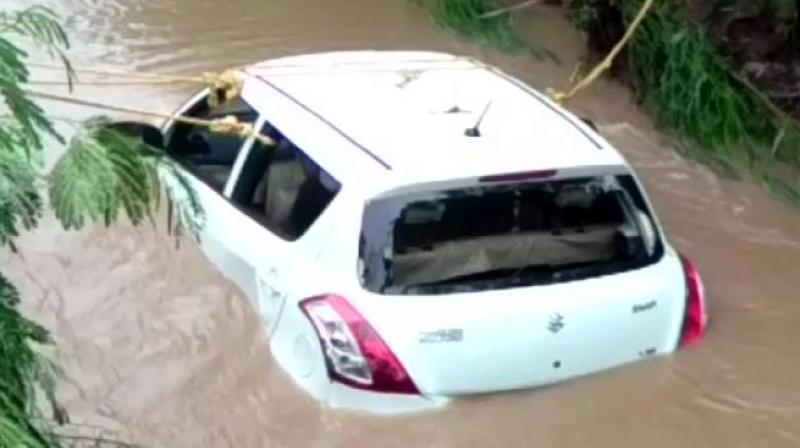 The car was found half a km away downstream. Bodies have been sent for autopsy, police said. (Photo: Twitter | ANI)

Bhopal: Four persons drowned when a car in which they were travelling was swept away in Gulyana area, 25 km from Mandsaur district headquarters, police said on Wednesday.

Rahul Maheshwari (30), Arvind Nagori (60), Dipak Agrawal (33) and Navratan Goel (54) tried to cross a bridge across a flooded stream in car, but the vehicle was swept away in strong currents, said Superintendent of Police Manoj Kumar Singh.

The car was found half a km away downstream. Bodies have been sent for autopsy, Singh said.

At least eight deaths in rain-related incidents were on Wednesday reported in Madhya Pradesh as heavy showers continued to lash many parts of the state.

Shumila (38) and her daughters Tanzim (9) and Ariba (3) died when a nearby boundary wall collapsed on their hut in Kilod Park locality of Bhopal city early this morning, said inspector Anand Tiwari.

A 16-year-old youth was swept away in a flooded drain in Tila Jamalpura area here around 5.30 am, police sub-inspector Shivraj Singh said.

Wasim, the youth, fell into the drain when he stepped out of his house. Efforts were on to trace him, the police officer said. An unidentified person died in a wall collapse in Eintkhedi near Bhopal, police said.