Chinese defence minister's 4-day visit to India is being seen as significant development to improve communications and military atmosphere. 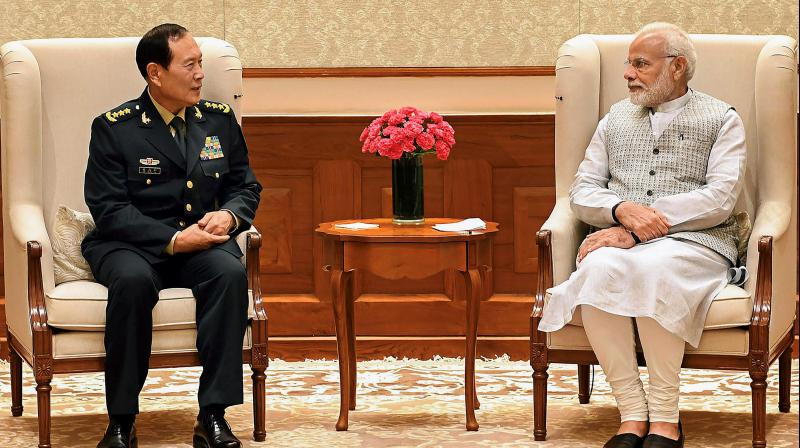 New Delhi: Prime Minister Narendra Modi on Tuesday said India and China are handling their differences with "sensitivity and maturity" by not allowing them to become disputes and this was evident from peace in border areas.

Modi also termed India-China relations as a factor of stability in the world and appreciated the increased momentum of high-level contacts between the two countries across all spheres, including in areas of defence and military exchanges.

He made these remarks when State Councillor and Defence Minister of China General Wei Fenghe called on him in New Delhi on Tuesday, according to a statement from the Prime Minister's Office.

"Terming India-China relations as a factor of stability in the world, the prime minister said that maintenance of peace and tranquillity in the border areas is indicative of the sensitivity and maturity with which India and China handle their differences, not allowing them to become disputes," the PMO said.

The Chinese defence minister's four-day visit to India, beginning Tuesday, is being seen as a significant development by officials on both sides to improve communications and atmospherics between militaries of the two countries after last year's 73-day Doklam standoff.

According to official sources here, the primary objective of Wei's visit is to deliberate with Indian defence establishment on implementation of decisions taken by Modi and Xi in their informal summit in Wuhan in April, including for improving mutual trust and avoid repeat of any Doklam-like face-offs.

In the summit, Modi and Xi had resolved to open a new chapter in ties and had directed their militaries to boost coordination along the border, months after the most serious military faceoff in decades between the two nuclear-armed neighbours in Doklam triggered fears of a war.

Wei, who is a key member in China's State Council -- the executive organ of China's central government -- is scheduled to hold restricted as well as delegation-level talks with Sitharaman on Wednesday.