India   All India  22 Aug 2018  Delhi cops form human chain to save couple trapped in fire at Paharganj
India, All India

A fire broke out at first floor of a building in Paharganj, trapping people who were on upper floors as they were sleeping at that time. 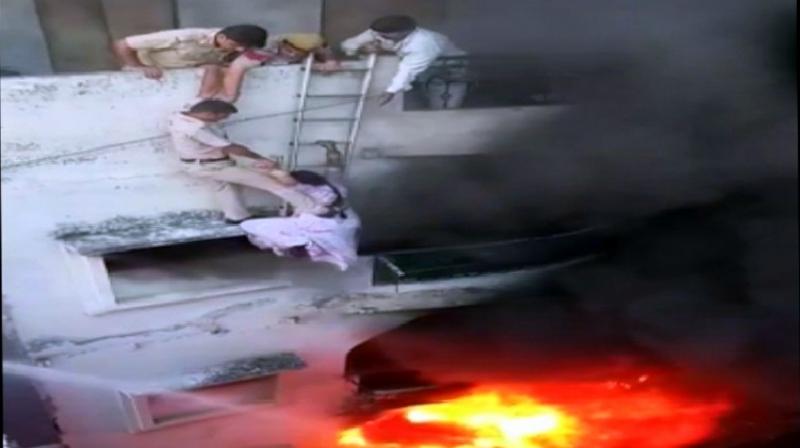 A couple was seen crying for help, with the woman hanging from the grille of the building's balcony on the second floor. (Photo: Twitter | ANI)

New Delhi: Delhi Police personnel saved the life of a couple who were trapped in a building at central Delhi's Paharganj area where a fire broke out early Wednesday morning.

The local police received a call about the fire in a street of Chuna Mandi in Paharganj around 6 am, a senior police officer said. The fire had started at the first floor, trapping people who were on upper floors as they were sleeping at the time, the officer said.

It was very difficult to go upstairs to save the trapped people. However, constables Manoj Kumar and Amit, with the help of other policemen, broke open the lock of an adjacent building to reach them, he said.

A couple was seen crying for help, with the woman hanging from the grille of the building's balcony on the second floor.

"The staff without caring for their life, reached the balcony of the second floor, made a human chain to reach the parapet. The woman, who was about to fall down, was saved first and later her husband was also rescued in a similar fashion," said the officer.

One man who was also trapped in the fire had jumped down to save himself and was injured in the act. He was taken to a nearby hospital for treatment, said the officer.