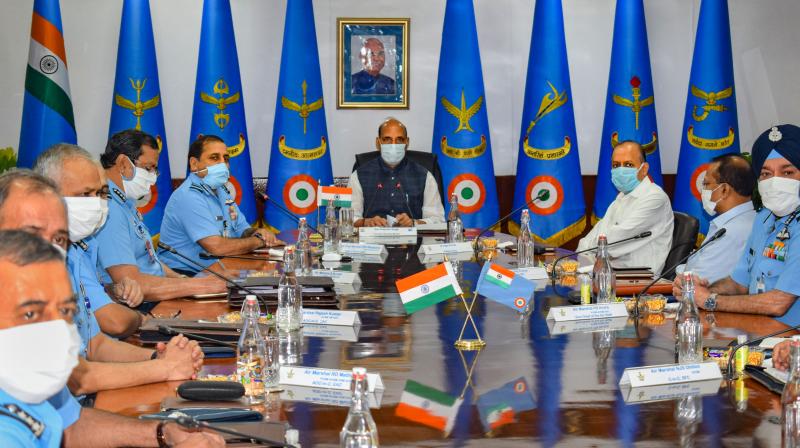 Defence Minister Rajnath Singh with other air force commanders at the meeting. (PTI)

New Delhi: Defence Minister Rajnath Singh on Wednesday complimented the Indian Air Force for its rapid deployment of assets at forward locations in response to the border row with China in eastern Ladakh, saying its Balakot strike and the current combat readiness have sent a strong message to "adversaries".

In an address to the top commanders of the IAF on the opening day of a three-day conference, the defence minister said the nation's resolve to defend its sovereignty stands firm and that the people of the country have full confidence in the capability of its armed forces.

Singh also talked about the "professional manner" in which the IAF conducted the air strikes deep inside Pakistan's Balakot last year and appreciated the force for its proactive response in bolstering its operational capabilities over the past few months.

"He stated that the professional manner in which IAF conducted the air strikes in Balakot as well as rapid deployment of IAF assets at forward locations in response to the prevailing situation in eastern Ladakh has sent a strong message to the adversaries," the defence ministry said in a release.

He said the nation's resolve to defend its sovereignty stands firm on the faith its people have in the capability of its armed forces.

Singh also mentioned the ongoing efforts to de-escalate tension along the Line of Actual Control and urged the IAF to stand ready to handle any eventuality.

Chief of Air Staff Air Chief Marshal RKS Bhadauria said that the IAF was well prepared to counter short term as well as strategic threats and the units were "evenly poised" to counter any aggressive action by the adversary.

He said the response by all commands in ensuring deployment and readiness of forces was prompt and laudable. He also emphasised on the need to focus on the ability to handle situations at a short notice for ensuring a robust response.

In his address, the defence minister also acknowledged the IAF's role in adapting to changes in technology.

He assured the commanders that all requirements of the Armed Forces, whether financial or otherwise, would be fulfilled, the ministry said.

In the conference, the IAF commanders will carry out an in-depth review of the country's air defence system which will include deployment of the first batch of Rafale fighter jets in the Ladakh sector.

The main focus of the commanders' conference will be to deliberate on the overall situation in eastern Ladakh and enhance the IAF's combat prowess over the country's air space in all sensitive sectors along the de-facto border with China including in Arunachal Pradesh, Sikkim and Uttarakhand, the sources said.

The commanders are expected to specifically deliberate on deployment of first batch of around six Rafale jets in the Ladakh sector by early next month as the aircraft are set to join the IAF's fighter fleet by July 29, the sources said.

In a demonstration of its aerial prowess, the IAF has been carrying out night time combat air patrols over the eastern Ladakh region in the last few weeks, in an apparent message to China that it was ready to deal with any eventualities in the mountainous region.

The IAF has deployed almost all its frontline fighter jets like Sukhoi 30 MKI, Jaguar and Mirage 2000 aircraft in key frontier air bases in eastern Ladakh and elsewhere along the Line of Actual Control (LAC) with China notwithstanding disengagement of troops by Chinese military from a number of friction points.

The IAF has also deployed Apache attack choppers as well as Chinook heavy-lift helicopters to transport troops to various forward locations. The IAF has also pressed into service a fleet of C-17 Globemaster III transport aircraft as well as C-130J Super Hercules in transporting heavy military equipment and weaponry to several forward bases in the region.