Taking a veiled dig at mainstream politicians, Malik said these leaders talk a different language in Delhi and a different one in Kashmir. 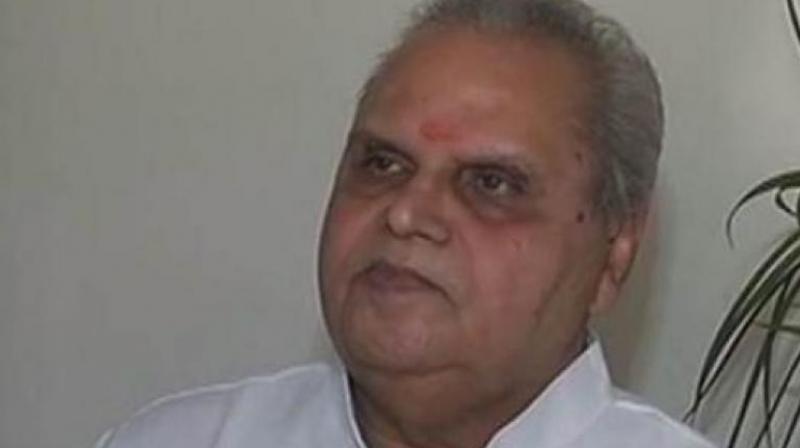 Srinagar: Stirring a political controversy, Jammu and Kashmir Governor Satya Pal Malik Sunday asked militants to stop killing innocent people, including security personnel, and rather target "those who have looted the wealth of Kashmir for years", a statement which evoked severe criticism from mainstream politicians.

"These boys who have picked up guns are killing their own people, they are killing PSOs (personal security officer) and SPOs (special police officers). Why are you killing them? Kill those who have looted the wealth of Kashmir. Have you killed any of them?" Malik asked, speaking at a tourism function in Kargil of Ladakh region.

The Governor's comments drew sharp reaction from former chief minister and senior Jammu and Kashmir National Conference leader Omar Abdullah, who said Malik should check his own reputation in Delhi.

"This man, ostensibly a responsible man occupying a constitutional position, tells militants to kill politicians perceived to be corrupt. Perhaps the man should find out about his own reputation in Delhi these days before sanctioning unlawful killings & kangaroo courts (sic)," Abdullah tweeted.

Later, the NC leader said, "Save this tweet - after today any mainstream politician or serving/retired bureaucrat killed in J&K has been murdered on the express orders of the Governor of J&K Satyapal Malik."

"Is he trying to promote a jungle raj?" asked State Congress chief G A Mir. He said the governor's statement does not behove the constitutional position occupied by Malik. However during his speech, the Governor was quick to add that guns could never be the solution and cited the example of LTTE in Sri Lanka.

"The government of India will never go down before a gun," he said, asking the militants to not take the route of violence. Malik said only 250 militants were remaining in the Valley, out which 50 per cent were Pakistanis who will be eliminated in encounters, unless they surrender.

"The maulivis promise you heaven after death but here I am promising you heaven while you live, provided you shun the path of violence," he added in his appeal to the local militants. Taking a veiled dig at mainstream politicians, Malik said these leaders talk a different language in Delhi and a different one in Kashmir.

"They should speak in one language at both places and need not scare us," he said. The Governor was speaking at the inauguration of Kargil Ladakh Tourism Festival-2019 at Khree Sultan Cho Sports Stadium Kargil. Malik said the twin districts of Kargil and Leh have huge tourism potential and that more such tourism festivals were needed. He said the Kargil Airport's expansion work will begin soon and that Rs 200 crore has been sanctioned for it. This will not only provide round-the-year connectivity but also give a new dimension to the tourism sector in the region, Malik said.

The Governor said the state administration is committed for the holistic development of Ladakh division and concrete measures were being pursued towards this goal. The government is taking strict measures to bring transparency in the system and removing various bottlenecks in the path of progress, he added.

On the occasion, the Governor announced the establishment of two degree colleges in Kargil district, including a Women's Degree College. He said a 2,500-MW solar power project will be set up soon, augmenting the power generation in Kargil.