Ram Chandra Paswan was a Lok Janshakti Party MP and passed away from a massive heart attack. 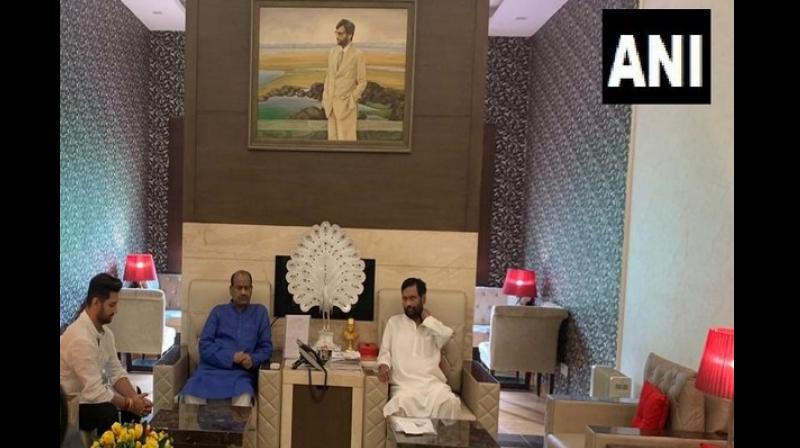 Speaking to media persons, Paswan had said that Ram Chandra was morew like a son to him. Speaker Om Birla met Union Minister Paswan at his residence. (Photo: ANI)

The Lok Janshakti Party (LJP) MP passed away at Ram Manohar Lohia Hospital at around 1:24 pm here on Sunday. Ram Chandra, 57, was admitted to the hospital after he suffered a massive heart attack on Thursday.

Speaking to media persons here on Sunday, Paswan had said that Ram Chandra was more like a son to him. "He was like my son. Even though he was my dear younger brother, I never regarded him as one," an emotional Ram Vilas had said.

Ram Chandra' body will be flown to Patna where the cremation ceremony will take place this evening.

Several senior leaders cutting across the party lines, including Prime Minister Narendra Modi and Bihar CM Nitish Kumar, have expressed grief over the sudden demise of the LJP leader.

"Shri Ram Chandra Paswan Ji worked tirelessly for the poor and downtrodden. At every forum, he spoke unequivocally for the rights of farmers and youngsters. His social service efforts were noteworthy. Pained by his demise. Condolences to his family and supporters. Om Shanti," Modi tweeted on Sunday.

Mourning Ram Chandra's death, Nitish Kumar announced that the last rites would be performed with the state honours.

"Ramchandra Paswan was a good leader and well known social reformer. He was simple, sociable and very popular in his constituency. His demise is an irreplaceable loss for both society and politics. His last rites will be performed with the state honours," Kumar said in the statement.