Sonia Gandhi said, 'We are committed to make an alliance work and are with Congress president in this endeavour.' 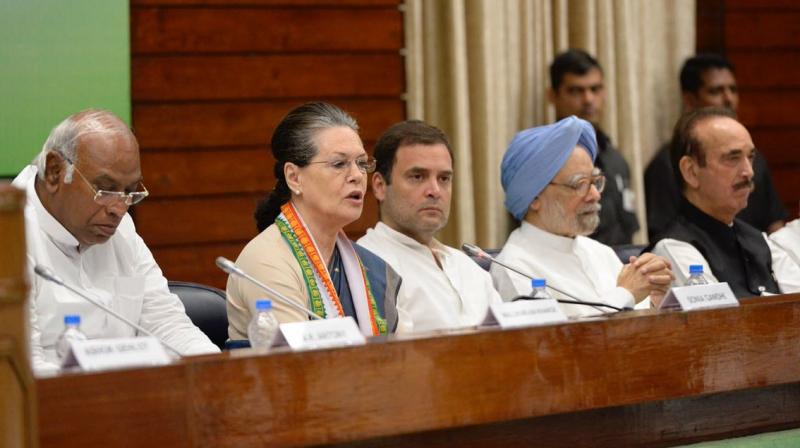 Rahul Gandhi, chairing his first meeting of the newly constituted CWC reminded the members of the committee the role of Congress as ‘voice of India’. (Photo: @INCIndia| Twitter)

New Delhi: The Congress Working Committee, the highest decision-making body of the party, on Sunday authorised party president Rahul Gandhi to forge an alliance with like-minded parties for the 2019 Lok Sabha elections.

“We are setting up a group that is going to do that (alliance),” Rahul Gandhi was quoted by news agency ANI as saying when asked about alliance ahead of next year’s general polls.

In her address at the CWC meet, UPA chairperson Sonia Gandhi said, "We have to rescue our people from a dangerous regime that is compromising with the democracy of India. We are committed to make an alliance work and are with Congress president in this endeavour."

At the meet, party’s strategy for 2019 Lok Sabha election was the key issue discussed with ‘alliance’ being the focus.

Following Karnataka elections, where the Congress supported the JD(S) to form the government despite getting more seats, Rahul Gandhi had hinted that he was willing to work with the opposition parties and ready to play second fiddle to stop the BJP from coming to power.

However, at today’s strategic meet, Congress leaders like Sachin Pilot, Shakti Singh Gohil and Ramesh Chennithala have reportedly said that the party should not shy away from a strategic alliance but should also remain at the centre of alliance and added that Rahul Gandhi should be the face of the alliance.

Rahul Gandhi, chairing his first meeting of the newly constituted CWC reminded the members of the committee the role of Congress as ‘voice of India’ and their ‘responsibility as the party as BJP is attacking Dalits, tribals, institutions and the poor’ in his opening remarks.

He also described the committee as an ‘institution comprising of experience and energy’ and a ‘bridge between past, present and future’. He also urged the members and women to ‘rise and fight for India’s oppressed.’

Rahul also said that the expansion of party vote base is one of the biggest tasks for the working committee. “In each constituency, we have to find people who have not voted for us, develop a strategy to win back their trust,” he added.

Speaking at the meet, senior Congress leader P Chidambaram called for the broadest political alliance to defeat the BJP-led NDA. He said the party was strong in 12 states and can boost numbers by three times to bring it to 150 seats and in the rest of the states, alliance with regional parties is important.

This meeting came after the joint opposition lost no-confidence motion against the Modi government in the Lok Sabha on Friday.