India   All India  22 Jul 2017  US, China should mind their own business: Mufti on third party J&K intervention
India, All India

US, China should mind their own business: Mufti on third party J&K intervention

The chief minister said that only bilateral talks between India and Pakistan can help resolve the Kashmir issue. 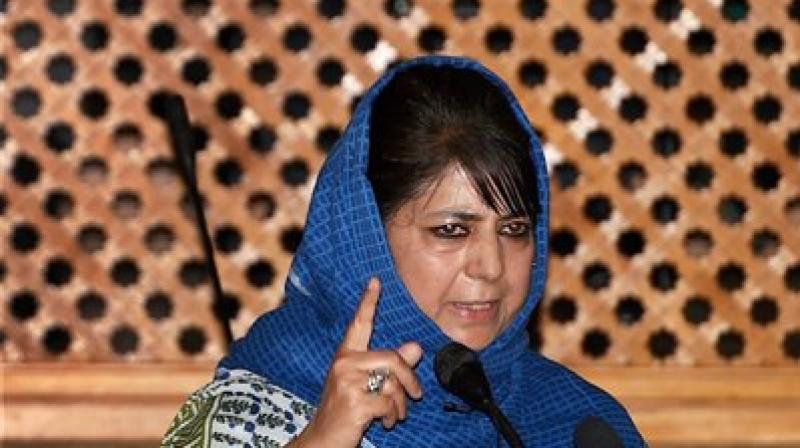 Mehbooba's statements came in response to Abdullah's remarks wherein he had suggested that third party countries like China and US should mediate in the Kashmir issue. (Photo: PTI | File)

Srinagar: Jammu and Kashmir Chief Minister Mehbooba Mufti on Saturday dismissed suggestions that the US, China or any other country should mediate in Kashmir issue and said India and Pakistan have to resolve the issue bilaterally.

"Be it America or China, they should mind their own business.  Wherever America intervened, you see (the situation in) Afghanistan, Syria and Iraq. China has its own vexing issue in Tibet. So, I think we have a map here which is that we, India and Pakistan, have to talk even after war. We have to talk bilaterally and what can America, Turkey or England do with us?" Mehbooba told reporters at Anantnag in south Kashmir.

The chief minister was responding to a question on opposition National Conference (NC) president and Member of Parliament Farooq Abdullah's suggestion of a third party
mediation to resolve the Kashmir issue.

Abdullah on Friday said India should take the help of "friends" to resolve the issue.
Mehbooba asked Abdullah whether he wanted the situation in Kashmir to be similar to what it was in countries like Syria, Afghanistan and Iraq where the US had intervened.

"They have played spoilsport in major issues of the world. See what they have made up of Syria, see the situation of Afghanistan and Iraq. God forbid, does Farooq (Abdullah)
want our situation similar to them? Or he wants our state to prosper?" the chief minister asked.

She said both India and Pakistan have to respect the agreements between the two countries to end the hostilities.

"We should take forward Shimla and Lahore agreements the way our elder leaders like (former PM) Indira Gandhi and (former PM Atal Bihari) Vajpayee did.

"Everyday our soldiers and people die on border and the same  happens (in Pakistan) as well. Some solution should come out for (ending) this and the solution will come only then when we, both the countries, respect these agreements," she said.

The CM said that dialogue is imperative as the two countries  face pressing development issues.

"We have to sit together and end poverty, provide our people with electricity, water and employment. India and Pakistan have to talk to each other," she said.