The police said that the troops from the Army’s 53 Rashtriya Rifles were patrolling the area on foot when “miscreants” hurled rocks at them. 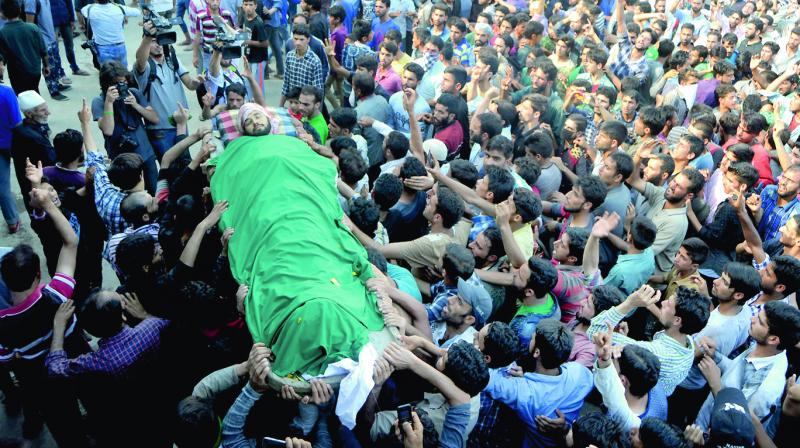 Hundreds of people take part in the funeral of a youth killed in Army firing at Beeru town of Kashmir. (Photo: H.U. Naqash)

Srinagar: A youth was killed and another wounded when Army troops opened fire on a mob in Beeru town of Jammu and Kashmir’s central district of Budgam on Friday.

Reports from Beeru said that a group of youth, while protesting against the recent killings in the Valley, turned violent and allegedly hurled rocks at troops patrolling in the area. The latter, while chasing them, fired their weapons in the air but when the stone-pelting crowd remained adamant, they opened fire hitting two youth, identified as Tanveer Ahmed Pala and Muhammad Ibrahim Wani, the former in the head.

The injured youth were rushed to a nearby medical facility where Pala was declared dead on arrival. The locals alleged that the troops earlier thrashed pavement dwellers in the town, setting off a wave of anger in the town.

The police said that the troops from the Army’s 53 Rashtriya Rifles were patrolling the area on foot when “miscreants” hurled rocks at them.

“Someone among these miscreants also hurled a fire cracker towards the Army men. Because of the bang, the Army men thought a grenade was hurled and they retaliated,” a statement issued by the police here said. After the killing of 25-year-old Pala, a tailor by profession, protests spread to more areas following which the town was placed under curfew. The police said that it has filed an FIR on the shooting incident.

The Army, however, alleged that the mob tried to snatch weapons from the soldiers who were also subjected to “heavy stone pelting” in Kondur village of Beeru.

Defence spokesperson Rajesh Kalia in a statement said that in no time the number of stone-pelters swelled and the intensity of stone pelting increased.

“Some stone-pelters tried to close in with the patrol party and also tried to snatch the weapons from the soldiers”, he alleged.

Life came to a standstill in most parts of the Valley on Friday as marketplaces, most financial and educational institutions and some government offices are shut following a general strike call issued by the alliance of key separatist leaders-Syed Ali Shah Geelani, Mirwaiz  Umar Farooq and Muhammad Yasin Malik against civilian killings and other alleged human rights violations by the security forces.

The weekly congregational prayers were not allowed in Srinagar’s Grand Mosque on the fifth consecutive Friday. The train services were suspended by the authorities “as a precautionary measure” earlier whereas public transport services remained off the roads in response to the separatists’ strike call.

The security around the summer headquarters of the United Nations Military Observers’ Group in India and Pakistan  (UNMOGIP) was very tight as the separatists’ alliance had asked people to march towards it to demand plebiscite and lodge protest over killings and other atrocities. The separatist leaders were placed under house arrest or detained in police stations ahead of the protest day. Malik who had gone ‘underground’ on Thursday to evade arrest emerged from a nearby mosque at Buchwara after Friday prayers and then began walking towards the UNMOGIP but the police came in his way and took him into custody, the witnesses and police sources said.

After the Friday prayers protests broke out in several Valley areas and at a few places clashes between stone-pelting mobs and security forces were going on when reports last came in.

Meanwhile, the separatist leaders’ alliance which calls itself ‘Joint Resistance Leadership’ has sent a memorandum to the UN Secretary General António Guterres appealing him and the member countries to take a serious note of the prevailing situation of the “grotesque abuse of human rights” in Kashmir and “a war like situation” between the armies of India and Pakistan along the Line of Control (LoC) and “come forward at this most critical juncture for the people of Jammu and Kashmir and play an effective role to end atrocities and suppression of Kashmiris especially the systematic killing of our youth”.

The memorandum also says “In present day world wars do not resolve issues, nor does repression. Dialogue and serious engagement are the means to be employed to move forward towards resolution. We appeal to the world body, where our dispute is pending for the last seven decades to honour its commitment as well as ethical responsibility to address the dispute to find a just and acceptable resolution of it in keeping with the aspirations of the People of this territory”.