The Armymen were returning from Amarnath but were stopped by police as they were travelling beyond cut off time. 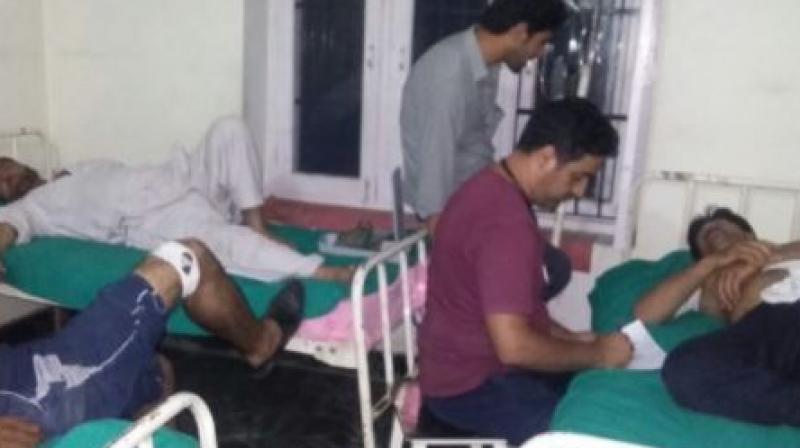 The soldiers allegedly thrashed the police check post at Sonamarg which had stopped them from going ahead. (Photo: ANI | Twitter)

Srinagar: Half a dozen Jammu and Kashmir policemen were injured, two of them seriously, in an attack by Army troops at Gund in northern district of Ganderbal late on Friday night, police said.

The police officials said more than 30 men from the Army’s 24 Rashtriya Rifles barged into the Gund police station and after beating up cops ransacked the premises.

“They were in civvies and were apparently incensed over being stopped by the policemen from heading towards Ganderbal from Baltal beyond the cut off time,” said a police officer who spoke on condition of anonymity.

The Jammu and Kashmir Police on Saturday afternoon said its Director General Shesh Paul Vaid has been assured by the Commander of the Srinagar-based Chinar (15) Corps that action would be taken against the soldiers involved in the incident.

It tweeted "DGP @spvaid has taken up the #Gund Ganderbal incident with Corps Commander who is looking into it and has assured action".

DGP @spvaid has taken up the #Gund Ganderbal incident with Corp Commander who is looking into it and has assured action.

However, defence spokesman Colonel Rajesh Kalia in a statement here said, “A minor altercation took place yesterday night between some Army personnel returning from Amarnath yatra in civil dress. No major injuries were suffered in the incident and the matter has been resolved by personal intervention of senior officers. Measures to prevent reoccurrence have been taken.”(sic)

Baltal, 93.5 km from Srinagar, is the base-camp of the shorter route to Amarnath.

The Army men were returning from Amarnath but were travelling beyond cut off time as per which all Srinagar-bound vehicles have to cross Sonamarg which is about 80-km north of Srinagar and 13.5 km short of Baltal by 2 pm.

The soldiers allegedly thrashed the police check post at Sonamarg which had stopped them from going ahead. Later, after being joined by their colleagues, some of them in uniform, went to nearby Gund and “attacked” the police station, the sources said adding that an FIR regarding the incident has been registered at the police station.

Two of the policemen have been grievously injured, the sources said. Six policemen including a sub-inspector are being treated at a local hospital.

A statement issued by the police, while giving the details of the incident, said during the intervening night of July 21 and 22 a group of 30 personnel of the 24 RR in civvies travelling in four vehicles escaped forcibly from the naka point established by police station Sonamarg at Poney Stand.

“These vehicles were carrying the Army personnel who were coming back after Amarnath. Due to the already issued cut off timing and present circumstance it was not feasible to allow the yatris after cut off time. The naka party of the Police Station Gund (Ganderbal) headed by ASI Ghulam Rasool stopped the said vehicles as per the directions,” the statement said.

However, the Army men in civvies without showing any identification came down from the vehicles and started thrashing the on-duty officer and other officials, resulting in injuries to said ASI.

“After that the Army parties of COB Gund and COB Surfraw 24 RR headed by Captain Shukla along with the personnel in civvies entered in Police Station Gund and thrashed and injured all the police personnel present and damaged some records of the police station and also some belongings of officials,” the statement said.

Army officials said they are ascertaining the details of the incident and would be able to comment only “when we know what exactly happened.”