India   All India  22 Jul 2017  Arm, leg to be severed unless you convert to Islam: Threat to Malayali writer
India, All India

Arm, leg to be severed unless you convert to Islam: Threat to Malayali writer

The letter alleged that some of the recent articles written by the award-winning writer amounted to 'misleading' the Muslim youth. 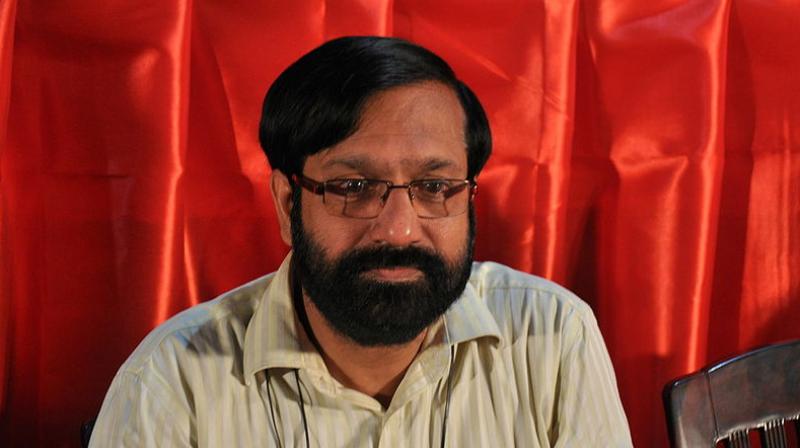 Malayali author KP Ramanunni said though there was no indication as to who was behind the letter, it was understood that it was posted from Manjeri in Malappuram district. (Photo: Wikimedia)

Thiruvananthapuram/Thrissur: A renowned Malayali author and a woman college lecturer have complained to the police of receiving threats even as Kerala Chief Minister Pinarayi Vijayan on Friday said his government would not ignore threats to those who expressed progressive views.

Efforts to tarnish those with progressive opinions on the social media and making death threats to them would not be accepted, Vijayan said on Facebook.

"Those who feel that independent voices can be gagged by threats are living in a fool's paradise," he wrote.

The chief minister's statement comes in the wake of Malayali author KP Ramanunni lodging a police complaint on Friday regarding an anonymous threat letter, warning him that his right arm and left leg would be chopped off if he did not convert to Islam within six months.

The letter was sent to Ramanunni's Kozhikode residence six days ago.

The writer said though there was no indication as to who was behind the letter, it was understood that it was posted from Manjeri in Malappuram district.

"I am not aware of the motive behind the letter. I filed a complaint with the Kozhikode city police commissioner today, urging him to look into the matter," he said.

Ramanunni said though he had ignored the letter initially, other senior writers advised him to file the police complaint.

The letter alleged that some of the recent articles written by the award-winning writer amounted to "misleading" the Muslim youth.

It also warned that Ramanunni would meet the same fate as that of professor TJ Joseph, whose right arm was chopped off by the members of a radical Muslim outfit for allegedly hurting their religious sentiments through a question paper he had set.

"Like TJ Joseph, your right arm will be cut off...your left leg too. You are given six months to convert to Islam. If you do not embrace Islam, we will inflict Allah's punishment on you," the letter said.

The police said a probe was launched on the basis of Ramanunni's complaint.

The right arm of Joseph, who was a professor in the Thodupuzha Newman College, was chopped off while he was returning home from the Sunday mass at a church in

Muvattupuzha in Ernakulam district on July 4, 2010.

A novelist and short story writer, Ramanunni is a recipient of the Kerala Sahitya Academy Award and Vayalar Award among other literary acclaims.

In the other case, Deepa Nishanth, a lecturer in the Thrissur-based Kerala Varma College, lodged a police complaint regarding death threats received by her on the social media, allegedly from right-wing activists, in connection with a painting of renowned artist late MF Hussain put up on the college campus.

She alleged on Friday that her morphed pictures with derogatory comments were widely circulated and shared on the social media.

She said the threat seemed to be on the assumption that she was in support of the exhibition of the controversial painting, 'Saraswathy', on the college campus.

A banner, with the painting, was put up by the SFI, the students' union of the ruling CPI(M) in Kerala, to welcome the freshers, she said.

"I was shocked to see the series of abusive comments against me on the social media over a matter, in which I was not even involved," said Deepa.

She added that the comments and morphed pictures were also sent to her family members, causing great mental agony.

The police registered a case under the Information Technology (IT) Act after the lecturer lodged a complaint with the chief minister and Director General of Police (DGP) Loknath Behera.