After resigning from RS, Mayawati to convene strategy meet tomorrow

Mayawati had tendered her resignation on Tuesday, after the Chair asked her to restrict her impromptu speech on Dalit violence in UP. 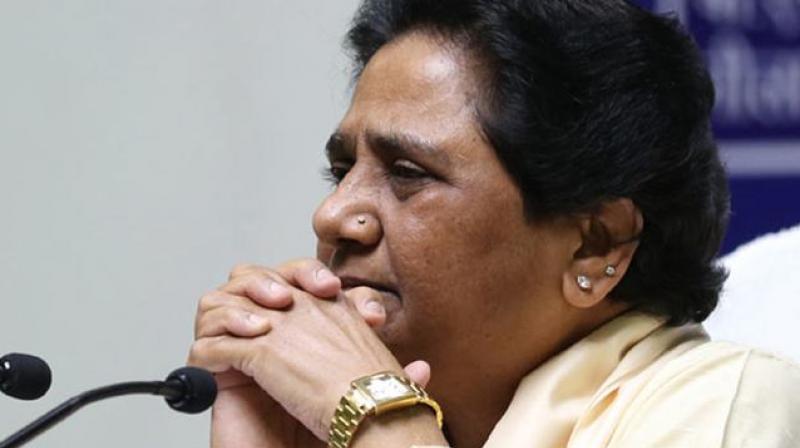 The BSP chief will be issuing directives on how to go about in the changed atmosphere arising out of her resignation from the Upper House. (Photo: PTI | File)

Lucknow: BSP president Mayawati has convened a meeting of senior party leaders in the national capital on Sunday to capitalise on her recent resignation from the Rajya Sabha and chalk out fresh strategy.

All important leaders of the party, including its coordinators, MLAs , MLCs and Rajya Sabha members have been invited for the meeting, a party leader said in Lucknow.

The BSP chief will be issuing directives on how to go about in the changed atmosphere arising out of her resignation from the Upper House.

"The party president is likely to tell the leaders as to how to apprise her supporters about the reasons leading to her resignation," a party insider said.

Mayawati had tendered her resignation on Tuesday, hours after the chair asked her to restrict her impromptu speech against Dalit violence in Saharanpur of Uttar Pradesh.

"I have no moral right to be in the House if I am not allowed to put across my views on atrocities being committed against Dalits," she had said.

"Mayawati was forced to resign when she was not allowed to speak about the issues relating to Dalit atrocities in the BJP-ruled state (of Uttar Pradesh)...when she, as the Rajya Sabha member, was not given an opportunity to speak about their problems, there is a slim chance that these problems will be redressed by this government," a party leader said.

"It is the duty of the party leaders now to redraw their strategy so as to uphold the dignity and honour of the Bahujan Samaj," the leader said, requesting anonymity.

Mayawati (61) will also be taking feedback from her party leaders about her decision to quit the Upper House. She might also decide on holding a rally or a meeting so as to directly communicate with her supporters, party sources said.

On the mood in the party over her resignation, the BSP leader said workers were very happy as "they feel she will now be able to give her full time to organisational matters, which would definitely help in strengthening the party".

Mayawati's action is seen as an attempt to consolidate her core Dalit support base and re-establish herself as the community's pre-eminent leader, after facing a massive defeat in the Uttar Pradesh Assembly elections earlier this year, with the BSP finishing a poor third.

Her party could win only 18 seats, while the BJP came to power by winning more than 300 of the 403 Assembly seats. The BSP had drawn a blank in the 2014 Lok Sabha
elections.

Back home in Uttar Pradesh, her resignation has evoked mixed response from different political parties, with the BJP terming it a "political stunt", and the Congress and Samajwadi Party holding the Centre's attitude responsible for her abrupt decision.

"Mayawati is unable to digest the results of the 2014 Lok Sabha and 2017 UP Assembly elections," UP BJP spokesperson Rakesh Tripathi said, adding people of the state have rejected partisan and communal politics.

Apna Dal (Sonelal), an ally of the BJP-led NDA, attributed her decision to "massive erosion" in her support base.

The Congress said the Dalit leader took the sudden decision as the BJP had unleashed "autocratic rule" throughout the country.