Madhya Pradesh on Monday administered 16,73,858 COVID-19 vaccine doses, the highest ever among states in the country 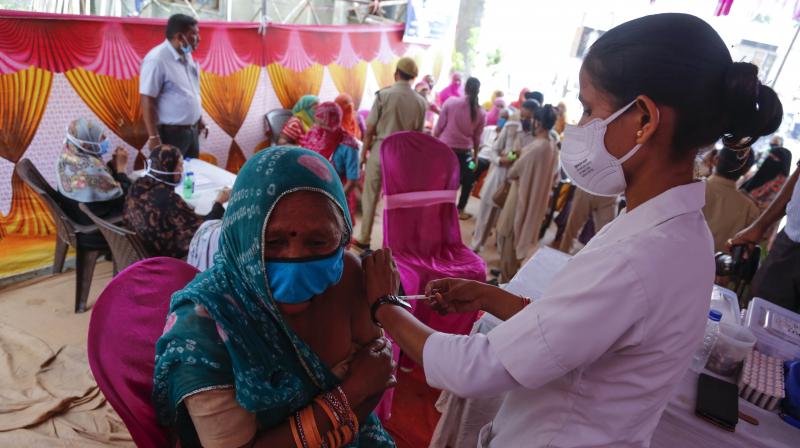 A woman is administered the Covishield vaccine during a vaccination drive against COVID-19 at a mosque in Ahmedabad, India, Monday, June 21, 2021. (AP Photo/Ajit Solanki)

Thus India has vaccinated more than the population of New Zealand in a single day.

Madhya Pradesh on Monday administered 16,73,858 COVID-19 vaccine doses, the highest ever among states in the country in a single day so far.

On the historic feat, Prime Minister Narendra Modi congratulated those who got vaccinated and lauded all frontline warriors.

"Today's record-breaking vaccination numbers are gladdening. The vaccine remains our strongest weapon to fight COVID-19. Congratulations to those who got vaccinated and kudos to all the front-line warriors working hard to ensure so many citizens got the vaccine. Well done India!" PM Modi had tweeted.

So far, 28.87 crore vaccine doses have been administered in India under the nationwide vaccination drive which began on January 16 this year.

Under the centralised vaccination policy, the Centre will procure 75 per cent of vaccines from the open market and give them to states for free distribution to inoculate all citizens above the age of 18. It will also handle the 25 per cent vaccination that was with states till now under the liberalised plan announced earlier.

Private hospitals will continue to buy the remaining 25 per cent and inoculate those willing to pay for their jabs. They can't, however, charge more than Rs 150 as a service charge per dose over the fixed price of the vaccine.

The maximum price that can be charged per dose by private vaccine centres for the three vaccines currently available in the country - Rs 780 for Covishield, Rs 1,410 for Covaxin and Rs 1,145 for Sputnik V.

As per the ministry, the cumulative recoveries in India reached 2,89,26,038, including 81,839 patients who recovered during the last 24 hours. With this, the daily recoveries continue to outnumber the daily new cases for the 40th consecutive day, taking the nation's recovery rate to 96.49 per cent.