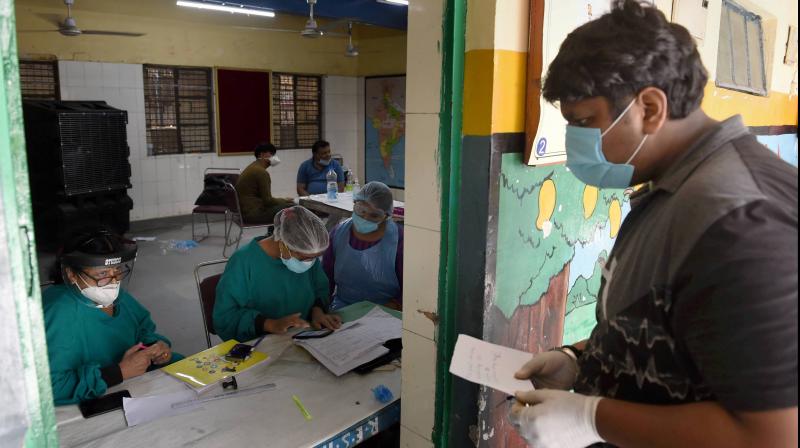 A medic interacts with a man during COVID-19 testing drive via Rapid Antigen at Govt school, in New Delhi. PTI photo

The Delhi High Court Monday said it expected the AAP government to "scrupulously" follow the directions issued by the Lieutenant Governor (LG) on June 8 in connection with testing of asymptomatic COVID-19 patients.

"It is expected of the Government of National Capital Territory of Delhi (GNCTD) that the LG's direction of June 8 shall be followed scrupulously," the bench said.

The court said it was not going to further monitor the matter in view of the Delhi government status report which said that LG Anil Baijal on June 8 set aside the June 2 order.

The LG by his June 8 order had directed that testing strategy recommended by the Indian Council of Medical Research (ICMR) be followed, said the report, filed through Delhi government additional standing counsel Satyakam.

The report also stated that testing in Delhi has been ramped up and another testing methodology in the form of 'Rapid Antigen Testing' has been adopted in Delhi as per the recommendation of ICMR.

Aggarwal, who is also the president of NGO 'Heart Care Foundation of India', said during the hearing that multiple orders from Delhi government and then the LG was leading to confusion among the doctors as well as general public.

He said there should be only one common order to avoid confusion.

Aggarwal claimed that as COVID-19 is a notifiable disease it is mandatory for all citizens to get themselves tested for the virus, irrespective of whether the patient is symptomatic or asymptomatic or pre-symptomatic patient.

It said the AAP government has also issued show cause notices to authorised private laboratories for testing asymptomatic cases by alleging that they have purportedly acted in violation of the ICMR testing guidelines as well as suspended testing by eight labs.

"The impugned actions restricting testing to symptomatic and high risk cases and reduced testing capacity of the state are in violation of the Article 21 of the Constitution in as much as denying the right of a citizen to get tested for an infection is a gross violation of Right to Life and the attendant right to health guaranteed under Article 21 of the Constitution," it had said.