Chinese soldiers drop in for yoga 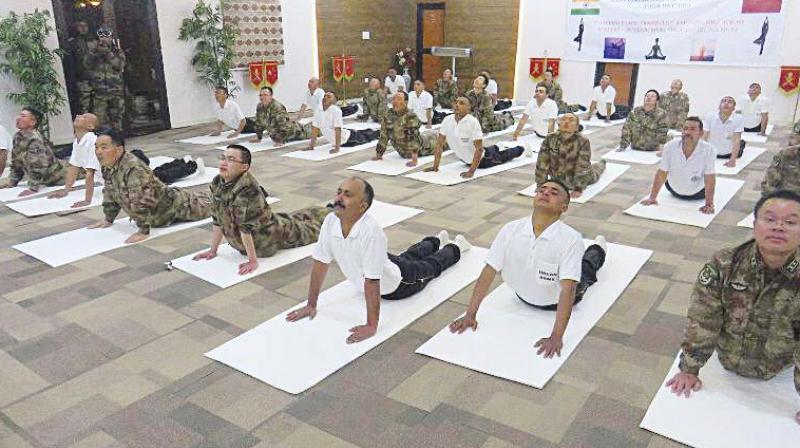 New Delhi: At 16,942 feet in eastern Ladakh, the temperature is always at a biting sub-zero, but there was a lot of warmth at the Indian Army’s Daulat Beg Oldie (DBO) border post on Thursday morning when 21 Chinese Peoples Liberation Army (PLA) soldiers led by Lt. Col. Li Mingju crossed over from their side at the Tien Wein Dien post to practise yoga with the Indian soldiers to mark the fourth International Yoga Day.

The never-before gesture is strongly indicative of an upswing in the bilateral relationship between India and China, particularly after an “informal” summit between PM Narendra Modi and Chinese President Xi Jinping in Wuhan in April-end.

“We had invited them during a border personnel meet last month. The PLA accepted our proposal and gave their acceptance in writing on Wednesday night appreciating the offer as a genuine peaceful gesture,” said Col. Aman Anand, Indian Army spokesperson.

“The joint yogic exercises by the Indian Army personnel and the PLA, which included eight officers, were marked by a lot of enthusiasm and bonhomie. Gifts were exchanged between the two sides. The PLA also put up a martial arts demonstration and one of their soldiers even played the guitar,” the official said.

The selection of DBO-Tien Wein Dien border post for the yoga session was as interesting and may perhaps be another sign of the growing war-mth for this was the site of a major standoff between the world’s biggest and second largest armies in 2013. Tien Wein Dien was also the tactical headquarters of the PLA during the 1962 border conflict between India and China.

In less than two months time, the two militaries will also meet in a week-long exercise called “Peace Mission 2018” from August 22-29 at Chelyabi-nsk in west-central Russia under the umbrella of the Shanghai Cooperation Organisation (SCO).

Several times in a year, the local commanders of the two Armies meet at five designated points along the India-China border.

The meetings are usually to defuse unwanted situations over frequent transgressions as the border is not clearly demarcated in many areas.