According to police, the truck was carrying illegally mined sand and the driver was accelerating to avoid being caught. 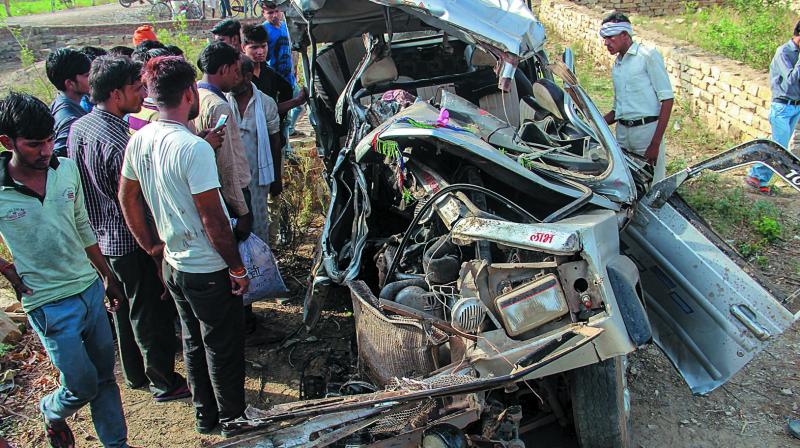 People look at the mangled remains of a jeep which was hit by a sand-laden tractor-trolley, in Morena in Madhya Pradesh. (Photo: PTI)

Bhopal: At least 15 mourners, including five women, were early on Thursday morning killed and six others injured when a sand-laden tractor rammed into the jeep they were travelling in a Madhya village.

The accident took place in Ghurgan village in Morena district, police said. According to the police, twenty one members of a family were travelling in a jeep from Gwalior to Morena to attend last rites of one of their close relatives.

The accident took place when the jeep was negotiating a curve near the village and hit by the tractor-trolley coming from the opposite side, police said. The vehicle in which they were travelling mangled after being hit by the sand-laden tractor.

Many passengers were trapped inside the damaged jeep and they had to be rescued by cutting the parts of the vehicle, police said. While ten people died on the spot, five others succumbed to their injuries in the hospital.

The injured have been admitted in three hospitals in Morena, police said. The drive of the truck fled the spot after the incident.

According to police, the truck was carrying illegally mined sand and the driver was accelerating to avoid being caught. He lost control over the vehicle and hit the jeep.

The jeep was so badly mangled that it took a lot of time to extricate the bodies. The truck driver fled the spot.