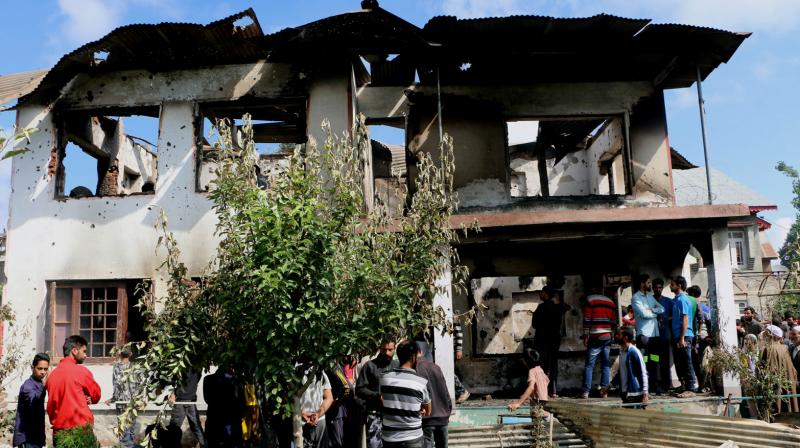 One protester was killed in police-protesters clash in Pulwama district. (Photo: Habib Naqash)

Srinagar: At least one protester died as parts of south Kashmir erupted on Thursday following the killing of three Lashkar-e-Taiba (LeT) militants in a six-hour long gun battle with the security forces.

The police sources and witnesses said that surging crowds mourning and protesting over the death of the militants clashed with the security forces at a number of places in Pulwama district including in Kakapora where the encounter took place.

The security forces fired teargas shells and used shotguns to quell stone pelting mobs, critically injuring a youth identified as 22-year-old Touseef Ahmed Wani. He was rushed to the sub-district hospital in the highway town of Pampore where doctors declared him brought dead. The doctors said that he had received multiple pellet wounds in abdomen and the head.

The clashes in several Pulwama areas were on when reports last came in. The Internet services in the south Kashmir areas were snapped on Wednesday evening immediately after the encounter had started “to prevent misuse of social media by anti social elements”.

The vehicular traffic on the vital Srinagar-Jammu highway has also been suspended along the Srinagar-Anantnag stretch, reports said.

The train services between Srinagar and Qazigund section have also been suspended whereas a security lockdown is being enforced in Kakapora, Awantipora and Pulwama towns and their neighbourhood.

Pulwama’s District Collector (DC) said that “restrictions” have been imposed in these areas “as a precautionary measure in view of prevailing law and order situation.” Also, the educational institutions including Pulwama’s Government Degree Colleges and Higher Secondary School have been closed in the area.

The three slain LeT militants have been identified as Shariq Ahmed and Abdul Majid of Kakapora and Sheeraz Ahmed Bhat of Padgampora area of Pulwama, all local Kashmiris. An Army major was injured during encounter, the second successful operations against militants in the Valley in 24 hours.

On Wednesday, two Hizb-ul-Mujahedin militants were gunned down in an encounter with the security forces outside the north-western town of Sopore. One of the slain men was a district commander of the Hizb, the officials said.

About one hour later, “contact” was established with the militants holed up in a residential house. The intermit firing between the two sides continued for about six hours and later the security forces, in their final assault, blasted the house resulting into the death of all the three militants, the sources and residents said. Two AK assault rifles with some ammunition were found on the slain men, the sources added.

This was the first successful counterinsurgency operation in Pulwama area, the hotbed of militancy, in many months as the locals have often hampered operations by taking by indulging in stone-pelting on the security forces enabling the trapped militants to escape.

However, top LeT commander Junaid Matto was killed along with a close associate in a fire fight with the security forces in Arwani area of neighbouring Anantnag district on June 16. Matoo carried a bounty of Rs 10 lakh on his head and was active in southern districts of Kulgam, Anantnag, Shopian and Pulwama for the past few years.

The authorities had described his killing “a major blow” to the LeT. The same evening the LeT militants killed six policemen including Station House Officer Feroz Ahmed Dar in an ambush in Anantnag’s Acchawal area, the incident which was seen by the authorities as a “revenge act” and had vowed to eliminate the perpetrators soon.

Meanwhile, multiple funerals were held on Thursday for the slain militants amid chanting of pro-freedom and pro-Islam slogans in Kakapora and Padgampora, reports said.