He also assured all possible help from the Centre for the cyclone-affected state. 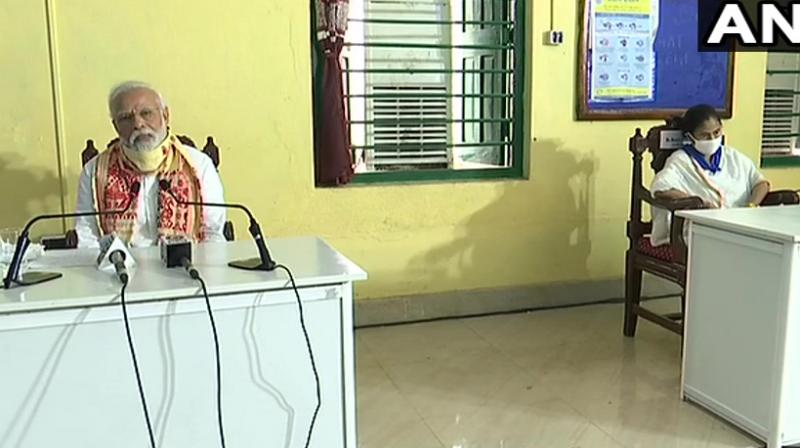 After his aerial tour of the Cyclone Amphan-affected areas of West Bengal on Friday, Prime Minister Narendra Modi has announced Rs 1,000 crore as immediate relief for the state.

Addressing the media along with chief minister Mamata Banerjee, Modi said that the people of India are standing with the people of West Bengal and assured all possible help from the Centre for the cyclone-affected state.

Earlier, he undertook an aerial survey of the areas in West Bengal ravaged by Cyclone Amphan. The prime minister was accompanied by Chief Minister Mamata Banerjee and Governor Jagdeep Dhankhar on the helicopter.

Modi arrived at the Kolkata airport at 10.50 am and was received by Chief Minister Mamata Banerjee, Governor Jagdeep Dhankhar and senior state BJP leaders.

According to official sources, Banerjee first held a short meeting with the prime minister, during which she would brief him about the ground situation.

She said there is a need to work together at this hour of crisis. "Most of the areas we surveyed were totally ravaged. I have briefed the prime minister in detail about the post-cyclone situation in the state," she told reporters at the airport after seeing off Modi.

"The prime minister has announced Rs 1,000 crore emergency fund... What's the package I don't know. I have told him that we will give him the details. It will take some time to assess the full overall situation but damage is of more than Rs 1 lakh crore," she said.

Banerjee said she "reminded the prime minister about Rs 53,000 crore the central government owes to the state for various social security schemes."
"If they (Centre) give some money to us, we can work," she said.