Amphan is the fiercest cyclone to hit West Bengal in 100 years. 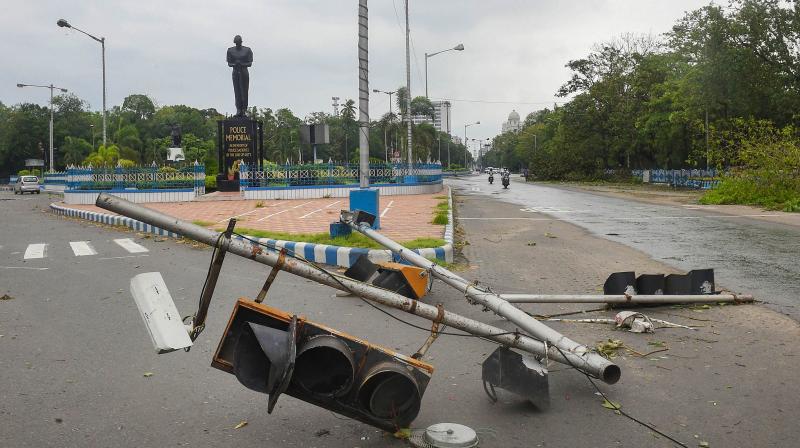 The trail of destruction. (PTI)

Kolkata/Bhubaneswar: Seventy-eight people died and thousands were injured by the fury of the six-hour-long cyclone Amphan that ripped through several parts of West Bengal and Odisha on Wednesday, leaving a heart-rending trail of death and destruction.

Amphan, the fiercest cyclone to hit West Bengal in 100 years, packed in winds of up to 190 kmph, and razed mud houses to the ground, destroyed crops, uprooted trees and electric poles. Two districts of the state — North and South 24 Pargana — were “completely devastated” with thousands of people left homeless, bridges washed away and low-lying areas in waist-deep water. Many of Kolkata’s roads were flooded and its 1.4 crore people were without power as torrential rain and high-speed winds roared through the state capital.

In many of Odisha’s costal districts, the cyclone damaged power and telecom infrastructure. Odisha government officials estimated that the cyclone has affected around 45 lakh people in the state.

Many of the affected areas are without power and in several districts mobile and Internet services remain disrupted as the cyclone damaged several communication towers.

At least 72 people were killed in West Bengal and six casualties were reported from Odisha. The cyclone also devastated parts of Bangladesh which reported 20 deaths.

“I have never seen such a dangerous disaster in my life. We saw Aila, Phani and Bulbul. But cyclone Amphan was far more devastating than the previous ones. The extent of damage is estimated to be around `1 lakh crore. The weather forecast of its duration of a few hours failed… It is worse than Covid-19. I request the PM to visit our state to assess how deadly the disaster was,” West Bengal chief minister said.

“Restoration work will start soon. A large part of North and South 24 Parganas and Kolkata are facing massive power cut since last evening. Even telephone and mobile connections are down… I will visit the affected areas very soon,” Banerjee added.

Banerjee’s appeal to the Prime Minister came after Modi tweeted, “Have been seeing visuals from West Bengal on the devastation caused by cyclone Amphan. In this challenging hour, the entire nation stands in solidarity with West Bengal. Praying for the well-being of the people of the state. Efforts are on to ensure normalcy. NDRF teams are working in the cyclone affected parts. Top officials are closely monitoring the situation and also working in close coordination with the West Bengal government. No stone will be left unturned in helping the affected.”

Besides North and South 24 Parganas and Kolkata, West Bengal’s districts of East Midnapore and Howrah were the worst hit as portions of several dilapidated buildings came crashing down in several places.

Kolkata recorded winds with speed up to 125 kmph that overturned hundreds of cars, uprooted trees and electricity poles that many fell, blocking key arterial roads and intersections, some even ripping through parked buses.

Kolkata residents recalled “living through hell” for six hours as the winds howled incessantly. Windows buckled from the pressure of the storm, cars floated on water logged roads, bumping against each other. Parts of air conditioners flew around like missiles.

Setting up a `1,000-crore fund for relief work, Banerjee noted that most of the deaths in West Bengal were due to tree-uprooting and wall collapse during the cyclone. “People were told to be inside home during the cyclone as a precautionary measure. But many of them did not listen to the warning and remained outside. This resulted in high casualties,” she added.

The chief minister announced `2.5 lakh compensation for each victim’s kin.
Among the 72 victims in the state, 15 are from Kolkata, 17 from North 24 Parganas, 10 from Basirhat and four from the South 24 Parganas-Sunderban region.

The “extremely severe” cyclone Amplan, which made landfall in Digha near Sundarban on West Bengal-Odisha border and Hatiya in Bangladesh on Wednesday afternoon, packing winds of up to 190 kmph, weakened Thursday as it moved into Bhutan.