India   All India  22 May 2019  With depleting reserves, Leh on brink of drinking water scarcity
India, All India

With depleting reserves, Leh on brink of drinking water scarcity 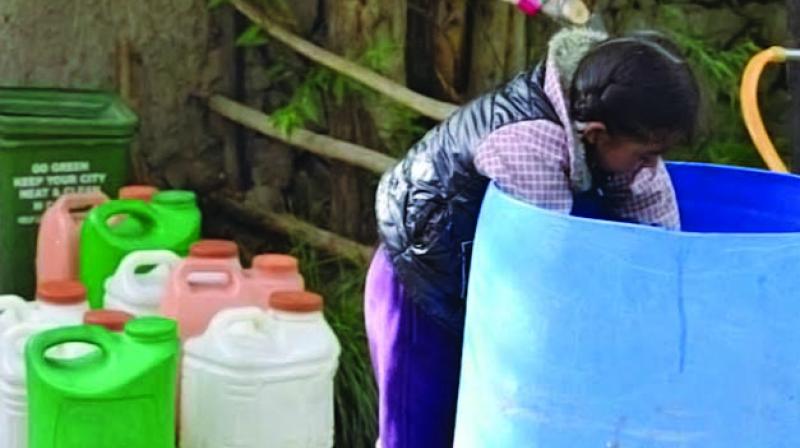 A young girl in Leh struggles to fill her water can (Photo: Padma Ladol)

Leh may be on the brink of drinking water scarcity with the public health engineering (PHE) department curtailing water supply to Leh town and its surrounding villages beginning this month.  The department is supplying drinking water for two hours in the morning and two hours in the evenings; the taps are dry for the rest of the day. The tube wells are also running dry at many places as groundwater level is falling fast all over Ladakh, especially in Leh.

In June 2018 freelance journalist Basharat Ladakhi told the Sunday Guardian Live that in the past two years more than 1,000 new hotels and guest houses have been constructed in and around Leh and hundreds of new constructions in Leh were going on, but most of the hoteliers and guest house owners were banking on tankers to supply water.

Researchers and environmentalists have claimed that the depleting water levels are because of the erratic weather conditions and more so because of climate change in the past decade.  The glaciers are melting at a fast pace and even the ground water levels are not good for the people of Ladakh during the current summer season.

In July 2018 Tsering Sandup, Executive Councillor (Tourism) at Ladakh Autonomous Hill Development Council told  Down To Earth magazine “Before 2005, Ladakh used to receive mainly foreign tourists. Their number was restricted to 25,000-30,000 each year. But after that, domestic tourists started coming in large numbers.”  Domestic tourist arrival grew by 43 per cent and foreign tourist arrival by 28 per cent between 2015 and 2017.

Hundreds of water tankers carry water on a daily basis to the hotels and the guest houses, but the receding water levels have already rattled the authorities.

“It is a crisis and the governments will have to intervene to save the Ladakh region from water shortage.  There are protests going on against water crisis in many villages of Leh” said 46 year old Kunnes Angmo, a farmer from Chuchot Yogma village in Leh distrct.

“Almost all the households, hotels and guesthouse have their own private borewell and there is no regulation on it. All the springs within Leh town have dried up and, we believe it is the impact of ground water exploitation. The question will not just stop at number of borewells but how much water they extract from the ground. It requires a comprehensive study,” Nordan Otzer, executive director, Ladakh Ecological Development Group told Down To Earth Magazine in July 2018.

According to another farmer from Chuchot Yakma village of Chuchot Block, 46 year of Stanzin Angmo, “The number of tourists coming to the lakes increases with the temperature. Hotels and cafes use lots of water for washing dishes and while using the flush toilets.”

In Leh town the water shortage is a big problem.  To solve the water problems we have to use less and less of water. Hotels and cafes should try and use the traditional dry toilets of Ladakh more instead of the modern flush toilets which consume more and more water.

If natural springs dry up then ways and means of recharging them should be found.  Rain water harvesting could be one solution of recharging the depleting ground water reserves.  Artificial glaciers should be formed to save ground water and then we should preserve the natural glaciers.  We should try to minimise the use of natural spring water as much as possible.  With these small steps we can help in overcoming the water shortage crisis in Leh and the nearby villages. Save Water to Save Leh!