Four militants and three soldiers were killed in the fierce exchange of fire, the longest encounter in many weeks witnessed in the area. 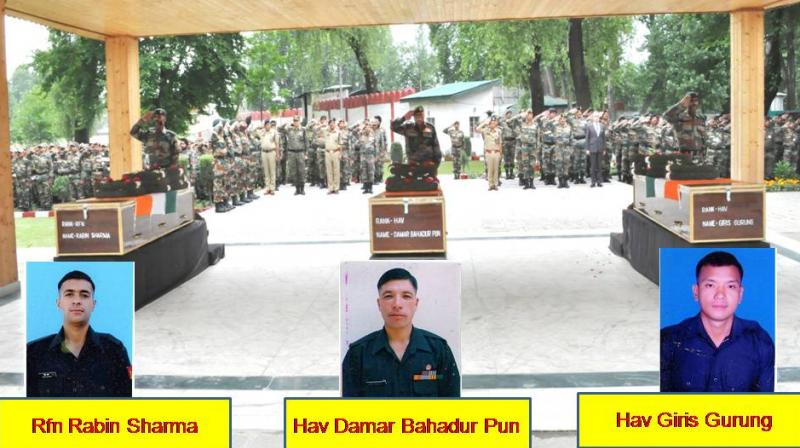 Srinagar: The fire fight which had begun on Saturday morning after the Army troops had detected and confronted a group of heavily-armed militants in Nowgam sector of the Line of Control (LoC) in Jammu and Kashmir’s north-western Kupwara district is over.

But the search of the area is still underway during which Army helicopters are being used for surveillance of the difficult terrain surrounded by thick forests, the police and Army sources here said. Four militants and three soldiers were killed in the fierce exchange of fire, the longest encounter in many weeks witnessed in the area.

On Monday, the corpses of the slain jawans were flown to Srinagar where senior Army commanders and other officials paid glowing tributes with full military honours to them. Homage was paid to the “valour and sacrifice” of the jawans in a solemn ceremony held at Badami Bagh Cantonment, the headquarters of Army’s 15 (Chinar) Corps, defence spokesman Colonel Rajesh Kalia said.

A statement issued by the Army added, “The Army today paid homage to three of its gallant soldiers who embraced martyrdom in a major counter infiltration operation launched over two days in Nowgam sector along the LoC during which four heavily armed terrorists were eliminated”.

Chinar Corps Commander Lt. Gen. JS Sandhu was joined by top officials of the civil administration and those of various security forces operating in the Valley in paying rich tributes to Havaldars Giris Gurung and Damar Bahadur Pun and Rifleman Rabin Sharma in the ceremony.

All the three slain jawans were residents of Nepal who as intrepid Gorkha soldiers were part of the team that intercepted the infiltrating militants on the morning of May 20. “In a relentless operation by the Army, which continued for two days, four terrorists were killed with four weapons and other war like stores recovered from them,” Col. Kalia said.

Havaldar Gurung, 38, who was from village Nagidhar in Kaski area of Nepal, had a distinguished service spanning 19 years and had been a part of many counterinsurgency operations earlier. He is survived by his wife Panch Maya Gurung and two young children.

Havaldar Pun, 40, a resident of village Karaing Tun in Gulmi, Nepal was an experienced soldier with 21 years of selfless service. He is survived by his wife Kalpana Pun and two children.

Rifleman Sharma was just 23. He had joined the Army in 2013. A native of Nepal’s Chuwa village in Parbat district, he is survived by his wife Sabita Sharma.

Their moral remains were later flown to Subathu in Himachal Pradesh for their last rites with full military honours, defence spokesman said.

Earlier on Monday, Defence Minister, Arun Jaitley, paid glowing tribute to the slain soldiers and said that the “evil designs” of militants and terrorists had been successfully foiled by the armed forces. "Infiltration bid by militants in the Nowgam sector, Kashmir Valley has been successfully foiled. Nation is proud of our soldiers,” he wrote on micro-blogging site Twitter.com. In another tweet, he said, “In the Nowgam operation our soldiers killed 4 militants & foiled their evil design. Tributes to our 3 martyred soldiers.”

Chief Minister, Mehbooba Mufti,  also paid rich tributes to the slain soldiers. She while praising their “valour and bravery” conveyed her “heartfelt sympathies” to the bereaved.