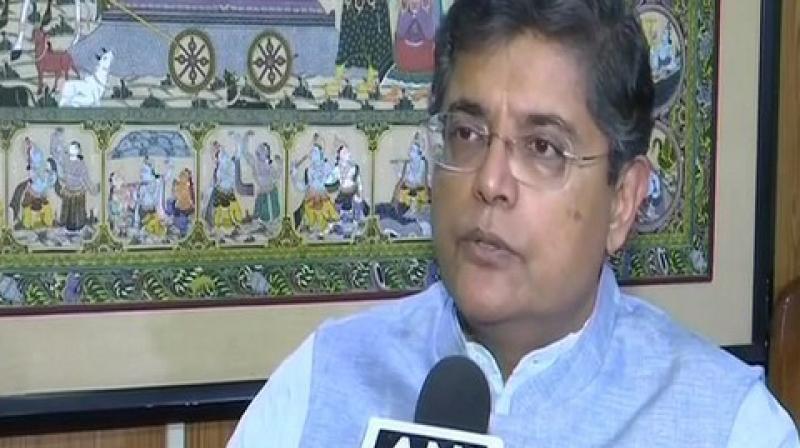 Bhubaneswar: Refuting allegations made by Odisha Chief Minister Naveen Patnaik that estranged Kendrapara MP and now BJP vice president Baijayant Panda lobbied with the Central Government to get railway lines laid to his mining companies rather than Kendrapara district, Panda said on Sunday that Patnaik was making “wild, unsubstantiated allegations.”

“Utter rubbish. I am disappointed that Naveen (Patnaik) has reduced himself to this state of making wild, unsubstantiated allegations. Sometimes he cries like a schoolboy. Sometimes he says I am complaining about his health. Sometimes he says I’m coveting his chair. In 18 years in the government I have never coveted any post,” said Baijayant Panda in an interview to ANI on the election trail in Kendrapara, which goes to polls on April 29.

When asked on the sequence of events that led to the estrangement of the former family friends, Naveen Patnaik mentioned an incident that led to Panda quitting the BJD and shifting alliances to the BJP.

When asked about the allegations levelled against him by Naveen Patnaik, Jay Panda responded that the people of Kendrapara knew how much he “slogged” to get the railway project started. Panda claimed that these were conspiracy theories planted by a coterie around the Odisha Chief Minister.

“For 18 years, Naveen did not find anything dubious in me. For 90 years the relationship between my grandfather and his, the very close relationship between my father and Naveen’s father and the fact that late Biju uncle constantly supported and encouraged our family’s businesses which have created 10,000 jobs in Odisha. None of these allegations came up till last year,” said Jay Panda in an interview to ANI.

Jay Panda also responded to allegations made by Naveen Patnaik that Panda was “not bothered” about Kendrapara by saying that the constituency stopped seeing industries being set up. “I brought steel magnates here but projects got stalled because some people were scared as to who would get credit. I think Naveen is behaving very childishly,” added Panda.

Panda also questioned claims made by the Naveen Patnaik led government that development projects were completed successfully. “I had conducted a survey in my first tenure. On paper 8,700 pucca (permanent) houses were constructed in Kendrapara. When I conducted an audit, only 160 could be found. About 8,500 were built on paper,” said Panda.

Jay Panda went on to say in his interview to ANI that IAS officer V Karthikeyan Pandian, a close aide of Chief Minister Patnaik, was the one in charge in Odisha. “Everyone knows that this IAS officer called Pandian has taken over the Government of Odisha. He is sheltering criminals, he is sheltering people accused in chit fund scam and mining scam and yet they are throwing accusations at me. This is simply ridiculous,” said Panda.

When confronted by this allegation that Pandian was the ‘Shadow CM’ of Odisha, Naveen Patnaik told ANI that this was a rumour that has been there since 2000. “I don’t think this is possible for one human being to do everything… we have good bureaucrats who are for the development of the state,” said Patnaik.