India   All India  22 Apr 2019  An evening of Indian and Canadian bagpipers
India, All India

An evening of Indian and Canadian bagpipers

Bagpipe music has caught the fancy of Indians and has become popular in some parts of the country. 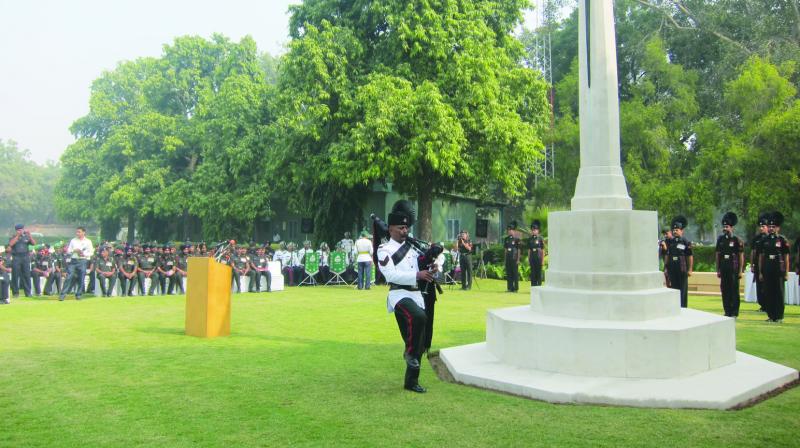 A piper from the Indian Army’s Rajputana Rifles at the Delhi War Cemetary. (Photo: Anil Bhat)

The heady sound of bagpipes preceded the Vancouver Police Pipe Band as it came marching into the lawns of Canada House playing a grand march, “Sixth of June”. The band, with its 24 members — the youngest are in their 20s and the oldest, almost 75 — thereafter, played their “usual repertoire” as Pipe Maj. Constable Cal Davis, put it, which included Lord Lovat’s Lament, Pathfinder, Crescent Beach, Jig Set — Walking the Floor, Donald Willie and his Dog, Ricking the Baby, Battle of the Somme and Heights of Darghai.

Then came a marvellous surprise. Constable Sukhi Sunger, the only turbaned Sikh bandsman — a drummer — unhooked the Scottish drum and took up a colourfully tasselled Punjabi “dhol”. For over the next few minutes, the summer evening air was filled with Muhammad Iqbal’s “Sare Jahan Se Accha”, rendered most melodiously by the Canadian bagpipers to the unmistakable beat of Sunger’s dhol. This was followed by the last four tunes, Caber Feidh, Garb of old Gaul, Scotland the Brave and Sarie. 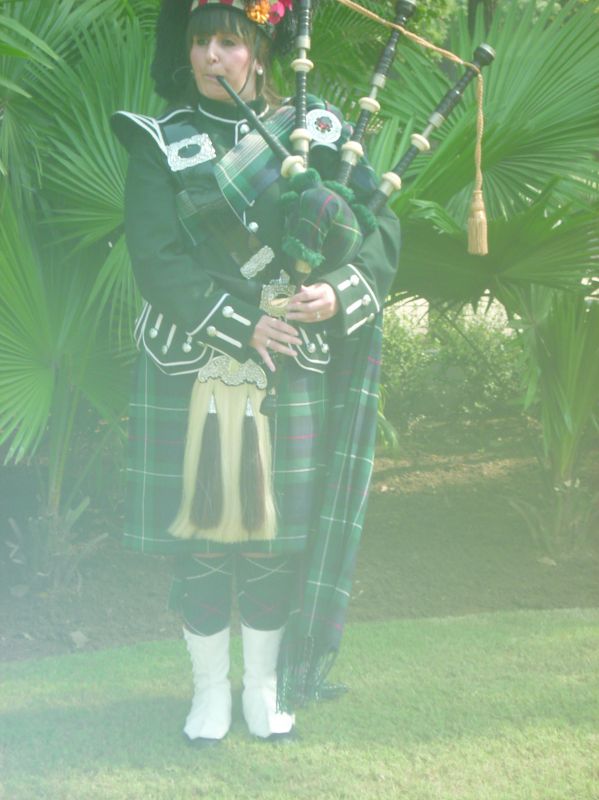 The band’s delegation was headed by Chief Constable Adam Palmer of the Vancouver Police, accompanied by Deputy Chief Constable Steve Rai and Barjinder S. Dhahan, member, the Vancouver Police Board from Canada. Dhahan informed the gathering about the incorporation of “dhol” in the band performing multiple shows at different locations in Amritsar on April 13th and 14th, one show in Nawanshahar on April 15 and the final show in Chandigarh on April 16th. Their tour of India was timed to straddle the 100th  year of the July 13, 1919 massacre at Jallianwala Bagh, which they visited and paid homage to at the memorial to the martyrs. They also visited the Golden Temple at Amritsar and the Wagah Border post.

Known for being ethnically diverse, the Vancouver Police Department has a growing number of Punjabis in its fold. The department’s band performs at various events for the Punjabi diaspora, including the annual Baisakhi Parade in Vancouver. The band has previously toured Britain, China, Switzerland, France, the USA, Mexico, Scotland, Germany, Hong Kong, Indonesia, Singapore, Japan, the Netherlands, Italy, and Portugal.

The Vancouver Police Pipe Band, raised in 1914, is the oldest non-military pipe band in British Columbia and ranks amongst the most senior police pipe bands in the world. Like the band of the Seaforth Highlanders of Canada formed only a few years previously, the Vancouver Police Pipe Band has during its long history occupied a special place in the hearts of Vancouverites. Its stalwart, strapping members have long been regarded in the city with great pride and affection. The pipe band, which is the “official band of Vancouver”, and its many individual members, have had a distinguished past and shows no sign of letting past tradition fall by the wayside.

Initially, the band performed in their regular police department uniforms. A few years later, from 1918 through to 1925, the band wore the Davidson tartan. In 1925 the band’s uniform was changed to the one it wears to this day, the Prince Edward Charles Stewart tartan. The full dress uniforms were patterned after those worn by the pipes and drums of the famed Scots Guards. This privilege was officially conferred upon the band 14 years later by King George VI during a visit to Vancouver. 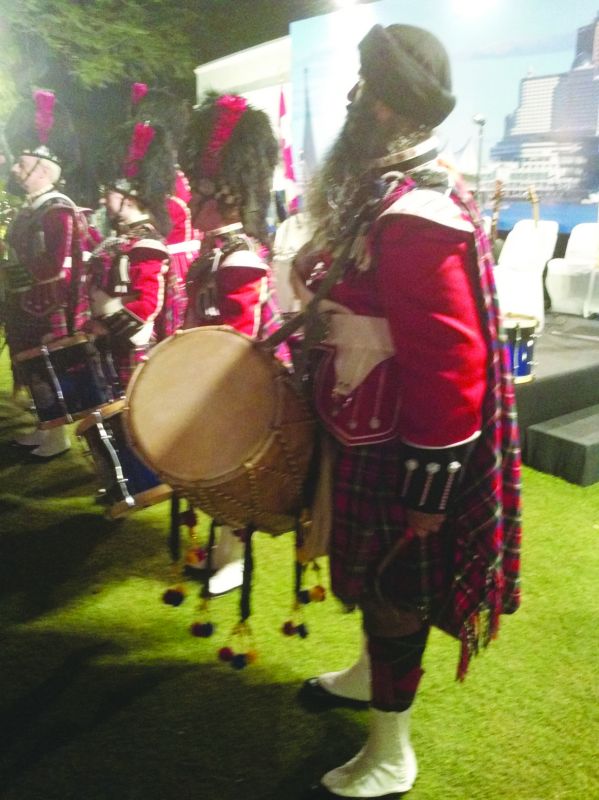 Constable Sukhi Sunger with the dhol

The Vancouver Police Pipe Band has spent the last 100 years entertaining people around the globe and at the same time acting as ambassadors for their country, province and city. In January 2014, the mayor awarded Vancouver’s highest honour, the Freedom of the City Award, to the men and women of the band. For the band’s centenary in June 2014, it travelled to England to play for the changing of the guard, at both Buckingham Palace and Windsor Castle. This was the first time in the 300-year history of the iconic, internationally recognised ceremony that a non-military band was granted the honour.

Another lone non-military bagpiper in Delhi is a Scottish lady, Laura Mennie, who works in the office of the British Defence Attache at the UK High Commission. Dressed in a non-military bagpiper’s uniform, she impressed audiences during the Armistice Day Remembrance Ceremony at the Delhi War Cemetery on November 11th and a couple of times at the residence of the British high commissioner, Dominic Asquith. When the Scottish deputy first minister John Swinney attended a reception in his honour at the British high commissioner’s residence in December 2018, he walked to the tune of the bagpipes played by Ms Mennie.

One wonders as to how many people — both foreigners and Indians — are aware of bagpipe music played in the Indian Army. The British, who used bagpipes in their Army bands, introduced the instrument to Indian troops in the 19th century. Each infantry battalion of Indian Army has its own pipes and drums band. While Indian Army bagpipers began with and played mainly Scottish tunes till Independence, since then many Indian compositions based on Indian folk music have been added to their repertoire.

If a head count is to be made of the number of pipes and drums bands, considering that every infantry battalion of the Indian Army has its integral band, India may well turn out to be leading in the world.

Bagpipe music has caught the fancy of Indians and has become popular in some parts of the country. One of them is in the mountainous region of Garhwal in Uttarakhand, where bagpipers are proud members of civilian bands requisitioned for weddings.

Bagpipe sounds are produced through reeds as are some traditional Indian instruments like the “shehnai” famously used in Indian classical music and during weddings as well as the “been” popularly played by snake-charmers.

It will be indeed interesting to match Indian bagpipers with the Scottish and those of Commonwealth countries, which also play traditional Scottish tunes.

While Indian military bands have been invited since decades to perform in many countries, India held its first-ever military music festival in March 2010, when military bands from six countries cast a spell over audiences in Delhi at the Army Parade Ground, Purana Qila and India Gate. The bands participating were from France, Britain, Bangladesh, Sri Lanka, Nepal and from India, which was represented by bands from Indian Army, Navy and Air Force. Besides armed forces bands, Kalaripayattu (the traditional martial arts of Kerala), the Bhangra, the Ladakhi dance and Maharashtra’s Lezim dance performed by soldiers also captivated audiences.