Coronavirus toll put at 5, possibly 6, with deaths reported from Mumbai and Bihar 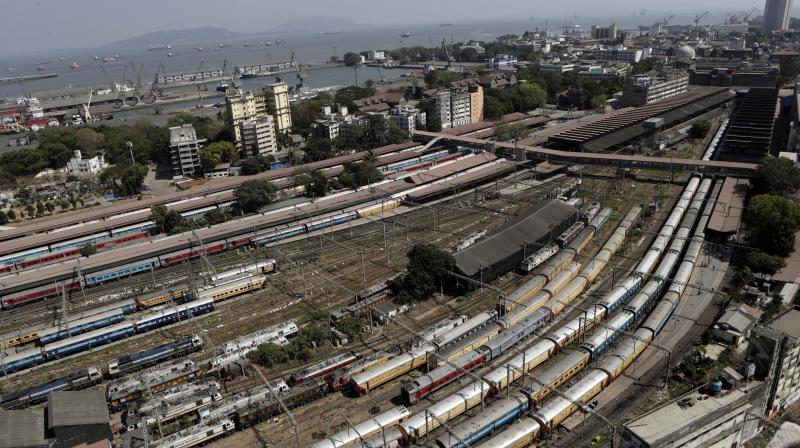 Trains stand parked at the Chhatrapati Shivaji Maharaj Terminus on Sunday during the nationwide shutdown called by prime minister Narendra Modi. The Railways announced that its passenger services will be shut down until March 31. (AP)

New Delhi: India reported one more coronavirus death on Sunday, taking the death toll to five even as the railways announced suspension of all its passenger services from March 22 midnight to March 31 midnight to help check the spread of the virus.

Bihar also reported its first death due to COVID-19 on Sunday, as a man with a travel history to Qatar died at the AIIMS in Patna, hospital superintendent CM Singh said.

The 38-year-old man, a resident of Munger district, was admitted to the hospital on Friday with a kidney ailment.

However, the Health Ministry was yet to confirm the death due to coronavirus.

In Maharashtra, a 63-year-old coronavirus patient died in Mumbai, taking the death toll in the state to two, a health official said.

The man was admitted to the H N Reliance Hospital in Mumbai on Saturday.

As the country observed 'Janata Curfew' and millions across the country decided to stay indoors to help check the spread of the virus, Punjab became the latest state to decide on a lockdown till March 31.

The Odisha government had also on Saturday announced a "near-total" shutdown in five districts of Khurda, Ganjam, Cuttack, Kendrapara and Angul and in towns of Puri, Sambalpur, Jharsuguda, Balasore, Rourkela, Bhadrak, Jajpur Road and Jajpur.

The Union Health Ministry said novel coronavirus cases in India have risen to 324.

However, the ICMR stated that a total of 341 individuals have been confirmed positive among suspected cases and contacts of known positive cases.

"The total number of active COVID-19 cases across India stands at 295 so far," the ministry said, adding 24 others have been cured/discharged/migrated while five have died.

In an unprecedented move, the railways on Sunday announced suspension of all its passenger services from March 22 midnight to March 31 midnight and said only goods trains will run during the said period.

The railways had already trimmed down its services on Friday by cancelling a majority of trains. However, it had allowed all trains that had already started the journey to continue.

According to a new order issued by the railways, only goods trains will run from March 22 midnight to March 31 midnight.

In Assam, the second test of a four-and-a-half-year-old girl, who had initially tested positive for coronavirus, has turned out to be negative, state Health Minister Himanta Biswa Sarma said on Sunday.

"The 4-year-old child who was suspected of #covid19 and tested in Jorhat Medical College and RMRC, Dibrugarh has been found NEGATIVE. There is no Covid19 positive case in Assam so far," Sarma tweeted, attaching a copy of the report.

Maharashtra has reported the highest number of COVID-19 cases at 63, including three foreigners, followed by Kerala at 52 including seven foreign nationals, according to health ministry data.

Delhi has reported 27 positive cases, which include one foreigner, while Uttar Pradesh has recorded 25 cases, including one foreigner.

In Haryana, there are 17 cases, which include 14 foreigners.

Karnataka has 20 coronavirus patients. Punjab and Ladakh have 13 cases each. Gujarat has 14 cases while Tamil Nadu has 6 cases which includes 2 foreigners. Chandigarh has five cases.