All four owners have surrendered before the police and the engineer has been taken into police custody. 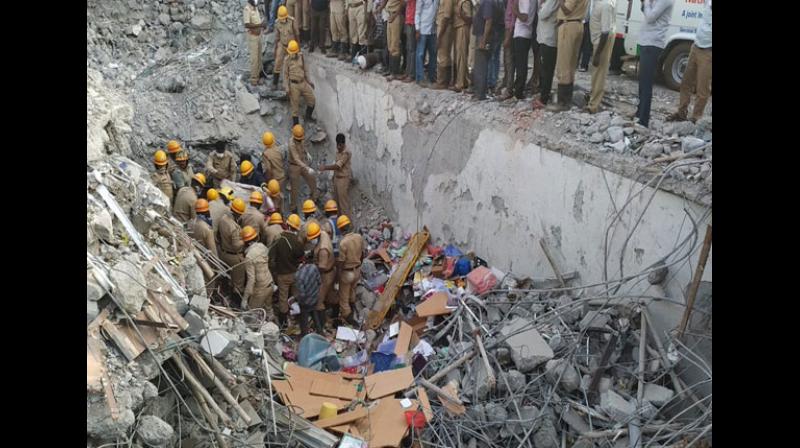 The operation is being conducted jointly by the NDRF and the State Disaster Response Force (SDRF). (Photo: ANI)

Dharwad: A couple was rescued on Friday after being trapped for 70 hours under the debris of a collapsed under-construction building in Karnataka's Dharwad.

The couple has been identified as Dhakalu and Sangeeta Kokare.
Additional Director General of Police (ADGP) (Fire and Emergency Services) Sunil Aggarwal told ANI that the condition of the couple is stable. "Their condition is stable. They have been sent to the hospital. After the final assessment, we will see how to discard the debris," he said.

The Dharwad building collapse death toll mounted to 14 on Friday morning after one more body was found from the debris as the rescue operation continued for the fourth consecutive day.

FIR has been registered against building owners, Ravi Basavaraj Sabarad, Basavaraj D Nigadi, Gangappa S Shintri, Mahabaleshwar Puradagudi and engineer Vivek Pawar. All four owners have surrendered before the police and the engineer has been taken into police custody.

Karnataka Chief Minister HD Kumaraswamy visited the site on Thursday and told the media that several people were suspected to be trapped under the rubble.

He said the district administration has already announced a magisterial inquiry and the government is ready to appoint a retired high court judge if required.

A Sub Divisional Executive Magistrate said the toll has risen to 14.

On Wednesday, the Indian Air Force airlifted two teams of the National Disaster Response Force (NDRF) to Karnataka's Hubli from Hindon in Uttar Pradesh to join the rescue and search operation after an under-construction building collapsed in Kumareshwar Nagar in Dharwad on Tuesday.

The operation is being conducted jointly by the NDRF and the State Disaster Response Force (SDRF).