With the death of these three militants, the number of ultras killed in the state over the past 24 hours has risen to five. 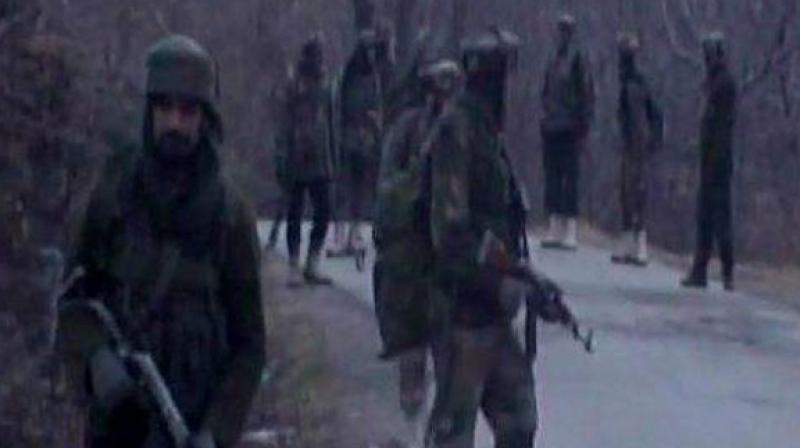 Srinagar: Three militants, including two Pakistanis, and a minor boy held hostage by the ultras were killed in separate encounters with security forces on Friday in Bandipora and Shopian districts of Jammu and Kashmir.

With the death of these three militants, the number of ultras killed in the state over the past 24 hours has risen to five.

"Two Lashkar-e-Toiba terrorists were killed in the Hajin encounter. From incriminating material, both the terrorists were identified as Pakistani nationals, Ali and Hubaib," a police spokesman said.

He said while one hostage -- Abdul Hameed was rescued Thursday evening, the second hostage -- minor boy Aatif Ahmad -- "could not be saved and was brutally killed by terrorists".

An unidentified militant was killed Friday in an encounter with security forces in Shopian district. The security forces launched a cordon and search operation in Imamsahib area of Shopian in south Kashmir following information about presence of militants there, the army official said.

He said the militants opened firing on the forces, who retaliated, triggering a gun battle. One militant has been killed so far in the ongoing operation, the official said, adding the identity and group affiliation of the slain ultra was being ascertained. Meanwhile, another gun battle broke out between militants and security forces in Sopore area of north Kashmir's Baramulla district, a police official said.

He said no casualties have been reported so far in the operation that is going on in Warpora area of Sopore. Two Jaish-e-Mohammad (JeM) militants were killed in an encounter with security forces at Kalantara in Baramulla district on Thursday while three security force personnel including an officer suffered injuries during the operation.

A police spokesman one of the slain militants was Amir Rasool, a local from Sopore, while the other was a Pakistani national. The JeM has claimed responsibility for the February 14 Pulwama attack that left 40 CRPF personnel dead.