Trudeau was accompanied by his wife, Sophie Gregoire, and two of his three children, who were also clad in traditional Punjabi outfits. 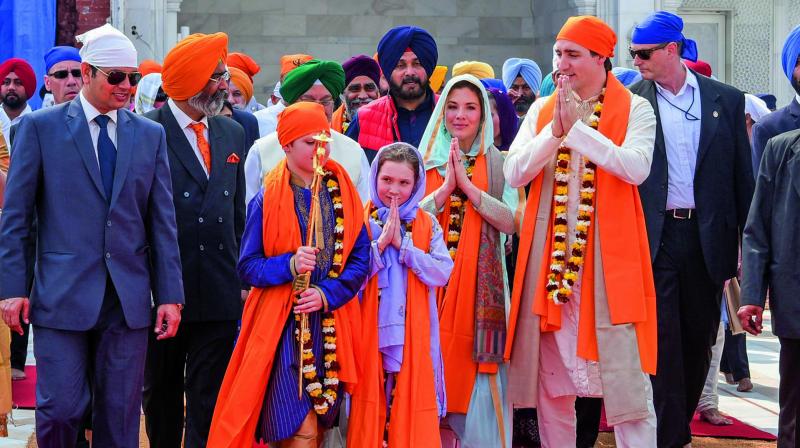 Canadian Prime Minister Justin Trudeau and his family members during their visit to the Golden Temple in Amritsar on Wednesday. (Photo: AP)

Clad in an off-white “kurta-pyjama” and with a saffron-coloured cloth covering his head, Canadian Prime Minister Justin Trudeau offered prayers at the Golden Temple, where he was presented with a “siropa”robe of honour.

Mr Trudeau was accompanied by his wife, Sophie Gregoire, and two of his three children, who were also clad in traditional Punjabi outfits.

The Prime Minister and his family also tried rolling out rotis at the Guru Ram Das Jee Langar hall, where devotees do voluntary kitchen work for feeding visitors.

Mr Trudeau, was also accompanied by Canadian federal ministers Harjit Singh Sajjan and Amarjit Bains, had asked local authorities to let him and his family enjoy the spirituality of the Golden Temple during their visit.