India   All India  22 Jan 2019  To pay real tribute to Netaji today, we must put the nation before self
India, All India

To pay real tribute to Netaji today, we must put the nation before self

In 1928 Bose was in the front ranks to support Motilal Nehru for the Congress presidentship in Calcutta. 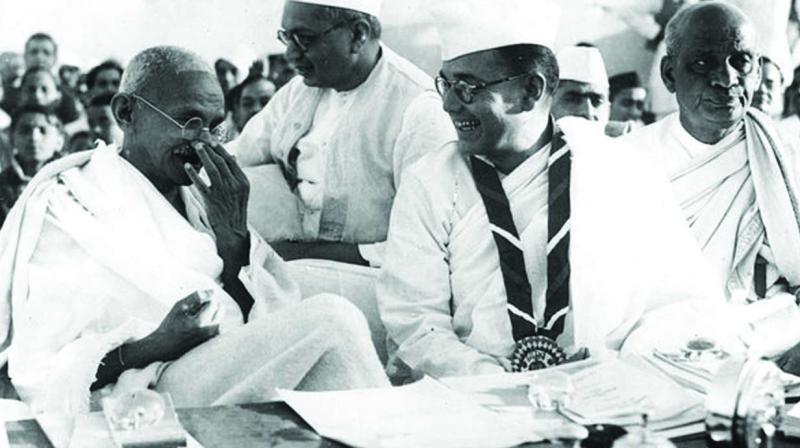 As the nation pays tribute to Netaji Subhas Chandra Bose today on his 122nd birth anniversary, it is worth recalling some of the events in the life and times of this iconic figure of modern India. A great deal has been researched and written, and is well known, on Netaji’s leadership of the Indian National Army (INA) and his subsequent death in a controversial aircrash on August 18, 1945 in Taipei, Taiwan, in what was then called Formosa. We will largely confine ourselves here to the pre-INA period in the life of this great national hero. The Netaji Research Bureau in Kolkata, in 1964, released an autobiography of Subhas Chandra Bose that was first published in London in January 1935.  It is a well documented record of Netaji’s narrative of the freedom struggle from 1920 to 1934, written by him while he was in Europe for a long period in mid-1930s.

Bose, who first met Mahatma Gandhi in 1921 after he gave up a career in the Indian Civil Service, was advised by the Mahatma to seek the guidance of Deshbandhu Chittaranjan Das, who was then seen as the “uncrowned king of Bengal”.  Bose adopted C.R. Das as his political guru and remained his most devoted, and favourite, follower till the latter’s death in 1925.  Fourteen years after meeting Gandhiji, Bose writes in his autobiography (1935): “In 1920 India stood at the cross-roads - the country was groping for a new method and looking for a new leader. Then there sprang up India’s man of destiny - Mahatma Gandhi - the Indian National Congress of today is largely his creation... He has converted the Congress into a living and fighting organisation... and the Congress is today the largest and most respresentative political organisation in the country. ”

This was written by Bose almost an year after he had stated in a joint statement  with Vithalbhai Patel (older brother of Sardar Vallabhbhai Patel, but not sharing his political views), in May 1933, famously known as the “Bose-Patel Manifesto”: “The latest action of Mahatma Gandhi in suspending the civil disobedience movement is a confession of failure as the present method of the Congress’ concerned... the time has therefore come for a radical reorganisation of the Congress on the new principle and with a new method.  For bringing about his reorganisation, a change of leadership is necessary.” 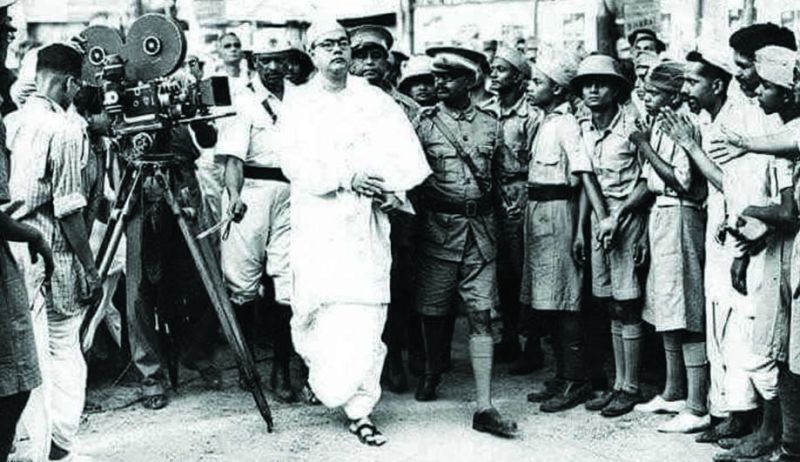 This was the last time when Netaji Subhas Chandra Bose was caught by Britishers.

Subhas Bose and Vithalbhai Patel were obviously hitting at not only Gandhi, but also his right-wing lieutenants - Sardar Patel, Rajendra Prasad and C. Rajagopalachari.

In 1928 Bose was in the front ranks to support Motilal Nehru for the Congress presidentship in Calcutta. So fond was Subhas of the older Nehru that out of reverence for him he donned a military uniform as commander of the Congress Volunteers (the Seva Dal of today) to give a military-like ceremonial salute to the president-elect. But he didn’t agree with the Motilal Nehru Committee Report in favour of dominion status. Along with Jawaharlal Nehru, Subhas formed the “Independence for India League” to propagate the goal of complete independence. Two years later, in December 1929 in Lahore, with the 40-year-old Jawaharlal Nehru as its president, the Congress declared “Purna Swaraj” as its goal.  The Congress also announced January 26, 1930 as Independence Day (later to become Republic Day). Relations between Jawaharlal Nehru and Subhas Bose, both icons of the youth of 1920s and 1930s), including Bhagat Singh, Chandra Shekhar Azad and other revolutionaries, were extremely cordial and friendly.

They both shared a common ideology of socialism, secularism (with its emphasis on equal rights for Muslims and keeping religion out of politics) and a leading role for India in world affairs.  These relations developed a strain only after Bose fell out with Gandhi later. But their personal bonds remained unaffected all through.  (The Netaji files that were released last year with great fanfare bear testimony to this.)

In June 1935, when Jawaharlal Nehru was in prison in India, Bose, who was in Europe, accompanied Kamala Nehru, suffering from pulmonary tuberculosis, to Badenweiler where she was to be treated.  Later, when Jawaharlal was freed to be with his wife in Badenweiler, Jawahar and Subhas spent two days together. A few years later Bose wrote to Nehru from Austria: “If I could be of any service in your present trouble, I hope you will not hesitate to send for me.” On February 28, 1936, when Kamala Nehru died in Lausanne, Subhas reached there to help Jawaharlal and Indira (then only 19) with the arrangements for the cremation.

Nehru had to soon rush back to India as he was informed he had been elected president for the Lucknow session of the Congress. Subhas wrote to him on March 4, 1936:

“Among the front-rank leaders of today, you are the only one to whom we can look up to for leading the Congress is a progressive direction.  Moreover, your position is unique and I think that even Mahatma Gandhi will be more accommodating towards you than towards anybody else. I earnestly hope you will fully utilise the strength of your public position in making decisions. Please do not consider your position to be weaker than it really is. Gandhiji will never take a stand which will alienate you.”

Then he added: “I was extremely glad to hear that you were desirous of starting a foreign department of the Congress. This falls in line with my views completely.”

Bose was elected president of the Congress for its Haripura session in 1938.  Now serious differences arose between Mahatma Gandhi and Bose on the latter’s re-election as Congress president for the Tripuri session in 1939 and subsequently the nomination of the Congress Working Committee (CWC) members.  Writes Sugata Bose in his highly readable biography of his grand uncle, His Majesty’s Opponent: “Bose’s political programme of uncompromising anti-colonialism and socialist reconstruction of free India placed him at odds with Gandhi and a majority of his colleagues on the Working Committee led by Vallabhbhai Patel, they found him too aggressive and arrogant.  He was obstinate about rejecting the federal part of the 1935 Act in its entirety and completely stubborn in opposing any compromise with the British Raj.  So the Congress right wing vehemently opposed his re-election as Congress president.” But the proverbial last straw on the camel’s back came when Sardar Patel wrote to Sarat Chandra Bose (Subhas’ older brother and a CWC member) that “Subhas’ re-election is held to be harmful to the country’s cause.”

Though Jawaharlal Nehru tried his best to sort out the differences between Bose and the Congress right wing, he could not succeed. Subhas was hurt, but he knew that his closest comrade of many years would not defy the Mahatma for him. Despite their political differences, he showed his respect for both Gandhi and Nehru a couple of years later when he took charge of the General Mohan Singh-founded Indian National Army in Singapore in  1943. Besides his own name, the brigades of the Azad Hind Fauj were named Gandhi Brigade, Nehru Brigade and Azad Brigade (Maulana Azad had by then become Congress president). Bose was also the first stalwart of the freedom struggle who addressed Mahatma Gandhi as “Father of our Nation”, and sought his blessings despite his approach being at total variance with that of Gandhi.

This is his real message for today’s political leaders — do not let political differences affect personal relations, and do not think that only you hold the monopoly of nationalism. Petty politicians and media persons who sowed the seeds of suspicion in the public mind prior to the declassification of the Netaji files about Nehru-Bose relations need to apologise now.  There can be no better tribute to Netaji than to put the nation above self and, like the composition of the INA, rise above prejudices of caste, creed and religion.

The writer, an ex-Army officer and a former member of the National Commission for Minorities, is a political activist based in New Delhi