PM Modi described content of card as 'ingenious' and asserted that it had inspired him to work even harder for the country. 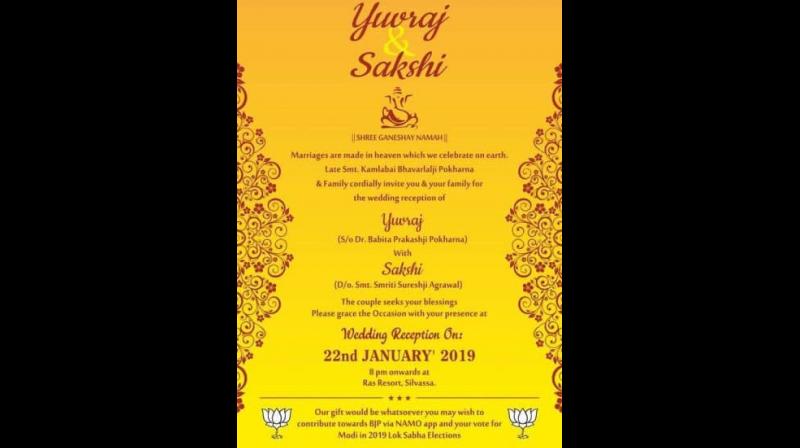 In a letter sent to the Surat-based couple - Yuvraj Pokharna and bride-to-be Sakshi Agrawal - Modi described the content of the card as “ingenious” and asserted that it had inspired him to work even harder for the country.

The couple will be tying the knot on January 22.

Talking to media on Monday, Pokharna said he received Modi’s letter, which is addressed to his mother Babita Prakash Pokharna, on January 17 through e-mail.

“Heartiest Congratulations to Pokharna family on the joyous occasion of the marriage of Yuvraj and Sakshi. I noticed a unique feature of the marriage invitation card sent to the guests,” read the letter signed and sent by PM Modi.

“The ingenuity of its content reflects your abiding concern and love for the nation. This also inspires me to keep working harder for our country,” the letter said.

“Best wishes and blessings to the couple for a happy and prosperous life,” PM Modi said in the letter shared by Yuvraj Pokharna with the media.

On the second page of the invitation card, the couple has tried to justify the multi-crore defence contract with France by enlisting several points under the heading “Some facts about Rafale deal”.

“Even a fool will not compare prices of a simple fly-away aircraft with a weaponised jet,” reads the very first line, followed by some figures, comparisons and information.

“It would be cheaper than the price which UPA had negotiated. The price (Rs 526 crore) which Congress quotes is nowhere in official documents. The weaponised aircraft is 20 per cent cheaper,” it said.

“The offset was given to 72 companies including DRDO, TATA, Mahindra...in which HAL is also included,” it added.

On the controversy surrounding the alleged last-minute exclusion of PSU Hindustan Aeronautics Ltd (HAL) from the deal, the couple defended the Modi government by writing, “UPA itself had refused the contract to HAL, which quoted 2.7 higher man hours required for the job”.

Talking to reporters, Pokharna said he was extremely happy that Modi noticed the gesture and showered praises.

“I am surprised to know that the PM gives so much importance to a common man like me. I hope that the content of the card would clear people’s doubt about the deal,” said Pokharna, a self-confessed BJP supporter.

His fiancee said the intention was to make women, especially housewives, aware about the deal in which the opposition Congress has alleged irregularities, a charge stoutly denied by the BJP and the Modi government.

“We want to convey to the people that the deal was good for the country. Many women, especially housewives, did not know the technicalities of the deal. Thus, we have put it in a simple way to make them understand,” she said.

The couple even requested the guests invited for the wedding to vote for the Bharatiya Janata Party (BJP) in the 2019 Lok Sabha polls.

“Our gift would be whatsoever you may wish to contribute towards BJP via NAMO app and your vote for Modi in 2019 Lok Sabha elections,” reads the footnote on the front page of the invitation card.