There was no place in the TDP for anyone who caused trouble to party workers, Chandrababu Naidu said without elaborating. 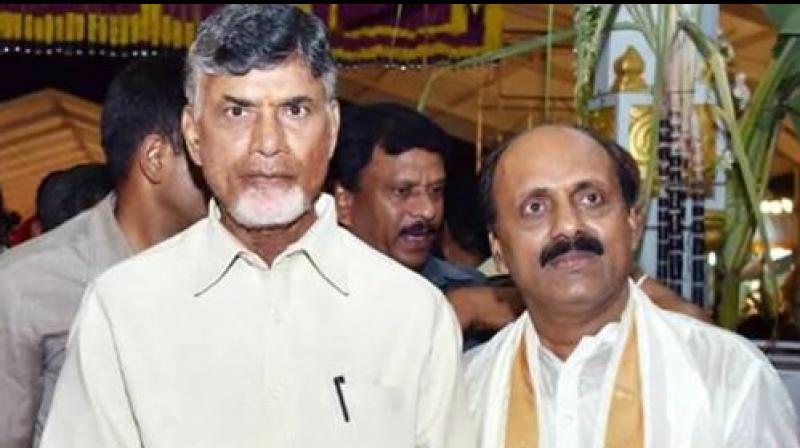 Earlier in the afternoon, TDP President and Chief Minister N Chandrababu Naidu announced the suspension of the MLA from Rajampet. (Photo: Facebook)

Amaravati: The ruling Telugu Desam Party in Andhra Pradesh Tuesday suspended from the party its MLA and the Government Whip in the Assembly Meda Mallikarjuna Reddy, who is all set to join the opposition YSR Congress.

Within hours of the suspension, Mallikarjuna Reddy called on YSRC president Y S Jaganmohan Reddy in Hyderabad and announced he was resigning from the MLA post and forwarding the letter to Assembly Speaker Kodela Sivaprasada Rao.

He would formally join the YSRC on January 31, the leader from Kadapa district said.

Earlier in the afternoon, TDP President and Chief Minister N Chandrababu Naidu announced the suspension of the MLA from Rajampet.

"Mallikarjuna Reddy is ineligible to continue in Telugu Desam," he said here.

There was no place in the TDP for anyone who caused trouble to party workers, he said without elaborating.

The announcement was made after Naidu held a meeting with party workers from Rajampet in the backdrop of reports that he was set to join the YSR Congress.

Mallikarjuna Reddy was the lone TDP MLA to be elected from Kadapa district in the 2014 assembly elections. He was made the government whip. For five years, he enjoyed everything. We made him the whip and his father Tirumala Tirupati Devasthanam Board member. But, as elections are nearing, he left the party, Naidu said, according to a TDP release. He told the workers that the TDP would win not only Rajampet but also other segments in Kadapa in the coming assembly elections, saying the government did a lot for the development of the district. Meanwhile, Mallikarjuna Reddy said joining the YSRC was like a home-coming for him.

I felt suffocated in the TDP for the last four and a half years. I am a free man now and am so happy, he said, after the meeting with Jaganmohan Reddy.