Sibal hit out at Ravi Shankar Prasad, saying he has made an 'irresponsible statement, not befitting the office he holds'. 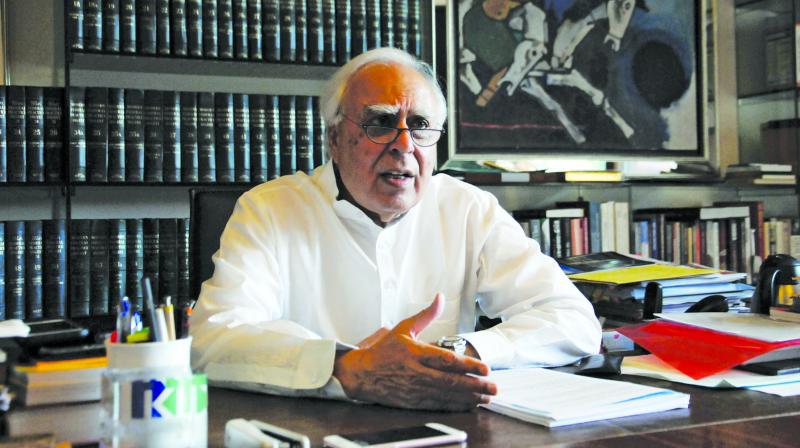 'This is an issue concerning the survival of democracy in India,' he told reporters. (Photo: File)

New Delhi/London: Senior Congress leader Kapil Sibal on Tuesday demanded a probe into the charges made by a self-proclaimed US-based cyber expert, terming them as "very serious" as they concern the survival of democracy in India.

A day after he was caught up in a row for attending the press conference by cyber expert Syed Shuja, who addressed it through Skype, Sibal hit out at Union Minister Ravi Shankar Prasad, saying he has made an "irresponsible statement, not befitting the office he holds".

Sibal said this is an issue of free and fair elections. The issue is whether the Electronic Voting Machines (EVMs), can be tampered with.

"This is an issue concerning the survival of democracy in India," he told reporters.

Prasad alleged that the London presser of Shuja is a "Congress-sponsored conspiracy" designed to "defame" Indian democracy and its Election Commission. He also raised questions over the presence of Sibal at the event.

"What was Sibal doing there? In what capacity was he present? My charge is that he was there to monitor the event for the Congress. It was a Congress-sponsored conspiracy designed to defame Indian democracy and its Election Commission," Prasad said.

Taking on Prasad, Sibal said he has made very "childish statements as the issue pertained to free and fair elections and the survival of democracy. A minister has made some statements which are irresponsible and are not befitting the statement of the office he holds," he said.

Justifying his attendance at the event, Sibal said, he attended the event after its organiser and journalist Ashish Ray sent him a personal invitation.

"When Ashish Ray said he has sent an invite to various political parties and he sent a personal invitation to me also. Since I know him, I told him that I would be there for some other work but I would certainly attend it and I attended it," he told reporters.

"It sounds like a science fiction story to me. But, it can be verified also," he said, commenting on the charges made by Shuja. Shuja made a sensational claim on Monday that the 2014 Lok Sabha elections were "rigged" through the EVMs, a charge rejected by the Election Commission of India. He said he fled India in 2014 because he felt threatened in the country after the killing of some of his team members. Although he appeared on screen through Skype, his face was masked.