Shah wondered, 'What is this grand alliance for? There was no slogan of patriotism. None shouted: Bharat Mata ki Jai!.' 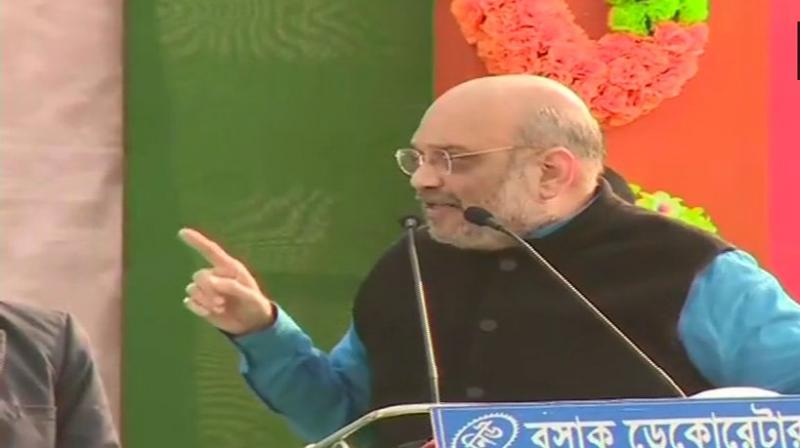 Shah predicted that the anti-BJP coalition would not succeed. (Photo: ANI | Twitter)

Kolkata: Kickstarting the Lok Sabha election campaign in West Bengal, BJP president Amit Shah on Tuesday set a target before the party of winning more than 23 seats out of 42 in the state.

Vowing to uproot the Trinamool Congress (TMC) from power in West Bengal he also bantered party supremo Mamata Banerjee's 'United India' rally recently at the Brigade Parade Ground claiming that there were at least nine leaders who attended the event to forge a grand alliance to oust Prime Minister Narendra Modi but all of them aspired to become the PM.

Addressing a rally at Sahapur in Malda, Shah said, "The BJP is coming to power under the leadership of Prime Minister Narendra Modi once again. In the coming elections, you therefore have to elect the BJP in more than twenty three seats to help Modi to come to power for the second time. Only you can save West Bengal from the Trinamool and Mamata Banerjee."

Referring to massive violence in the Panchayat and Municipal Elections in the state the BJP chief also cautioned the Trinamool against electoral malpractices.

"In the Lok Sabha Elections, each and every booth will be covered by the Election Commission personnel and the central paramilitary forces troops," he noted.

Slamming the West Bengal chief minister for her Brigade rally, the BJP chief wondered, "What is this grand alliance for? There was no slogan of patriotism. None shouted: Bharat Mata ki Jai!."

He predicted that the anti-BJP coalition would not succeed.

Shah also lashed out at Banerjee for her government's delay in granting permission for the landing of his chopper near the venue of his rally.

"Even if you wouldn't have given the permission, I would have addressed the rally from the helicopter."

He alleged, "We want to eliminate illness, poverty, corruption and unemployment. But she wants to remove Modi only. She can't see anything except him."

On the Trinamool chief's move to pull out from Ayushmann Bharat health insurance scheme, Shah accused her of depriving the people of the state from the central government's benefits.

Shah who recently was diagnosed with swine flu came to the state on a two day tour despite having fever.

Taking a jibe at the rally of opposition parties in Kolkata, he said the anti-BJP parties did not utter 'Bharat Mata ki jai or 'Vande Mataram' even once during the public meeting, but kept chanting 'Modi Modi'.

He alleged that the 'mahagathbandhan' of opposition parties was meant for "gaining power and serving personal interests". "Mahagathbandhan is all about greed and lust. They want to remove Modi, while we want to remove poverty and corruption," he said.

Describing the Trinamool Congress dispensation as a "government that facilitates murders", he said the party will be ousted in the general elections.