In India, although the market economy is reasonably entrenched when private goods are offered, it is a far cry in the case of public goods. 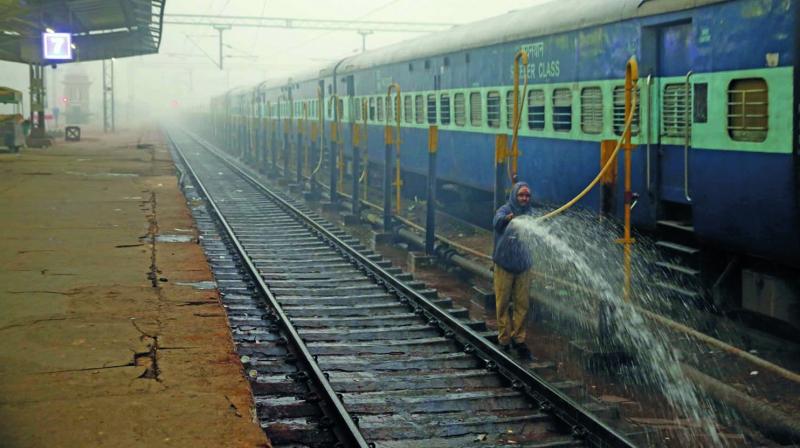 India’s mammoth rail network is truly a mass transportation system, with railway track cut through some of the most densely populated cities, flanked by shanty towns, in the nation of more than 1.3 billion people. (Photo: AP)

In theory, one cannot be against the dynamic pricing as it results in optimal utilisation of resources and revenue generation and this is true for organisations like Indian Railways (IR) which incur huge operating losses on passenger services: IR recovers only Rs 60 for every Rs 100 it spends for operating passenger services.

The first question is whatever experiment IR did with dynamic pricing has worked so far or not. The answer is yes and no. When the surge fare is anywhere between 1.1 times and 1.5 times that of base fare as in dynamic pricing of premium trains on September 9, 2016, which fetched about Rs 500 crores for IR in a year, the answer is yes. When the dynamic pricing was introduced in trains such as Suvidha, where the surge fare is anywhere between 1.5 times and three times that of base fare, the occupancy was about 60 per cent to 70 per cent, which means passengers are not ready to pay more than twice the base fare and hence the answer is no.

In India, although the market economy is reasonably entrenched when private goods are offered, it is a far cry in the case of public goods. In this backdrop, the various dynamic pricing plans of IR presented by railway officials before the ministry of railways during December 2017 are to be evaluated. These proposals were presented on the impression that when the fares are increased across the board, it creates a nationwide resentment, whereas if it is done selectively through dynamic pricing, the resentment will be less. The increase in revenue for IR with dynamic pricing is insignificantly compared to price increase across the board but the resentment with dynamic pricing may outweigh the benefit in terms of revenue increase as outlined by Richard Thaler.

Unlike the private transport providers, IR still operates directly under ministry and any impression of “fleecing” without corresponding benefit to passengers who pay more, would give an impression that IR is greedy, expedient and unscrupulous and would dent the image of the Centre. Hence, every proposal of dynamic pricing should be seen through the prism of how passengers perceive it as much other factors like resource utilisation and revenue increase.

The first proposal is that passengers may have to pay more for high-speed trains compared to others in the same route. The second proposal is premium charges for overnight trains and trains with pantry cars. Since the passengers save their travel time in the first proposal and have in-house catering facility in the second proposal, a moderate increase in fares for these categories is not a bad idea per se.

The fourth proposal, allowing confirmed booking through e-auction a week in advance on popular trains for few tickets, looks like a good proposal. Despite Tatkal scheme, passengers who are ready to pay extra for their 11th-hour travel are not sure of their travel as they are forced to wait for Tatkal window to open and compete ferociously in 15 minutes window by which Tatkal tickets are completely sold. These passengers will be happy to book their tickets through e-auction a week in advance by paying more and thereby ensuring their travel on a given day.

The fifth proposal is that passengers should be offered discounts on trains reaching destination at inconvenient times, for example, between 00.00-04.00 and 13.00-17.00 hours. First, the odd hours are only between 23.00 hours and 05.00 hours as it not only creates problem for passengers to reach home from the railway station but also disturbs passengers’ sleep. If one studies the booking pattern of trains in India, when passengers are offered two trains between the same origin-destination pair, the first one reaching at normal hours and the second reaching at odd hours, passengers first look for tickets in the first train and when there are no tickets in the first train, passengers willingly or unwillingly book tickets in the second one. Ultimately, the second train also goes with higher occupancy as much as the first. So, when passengers are left with no choice, they choose trains originating or reaching destination at odd hours and a better solution is to rationalise the schedule of trains so that trains originate and reach destination during non-odd hours and preferably travelling through non-work hours as much as possible. Any discount for trains reaching destination at inconvenient times would only reduce the fare box collections for IR.

The sixth proposal is that 10 per cent to 30 per cent discount to be offered for first leg as well as the last leg vacant berth. The problem of vacant berth in the first leg and last leg essentially arises from not running trains based on origination-destination demand. Due to political compulsions, IR has been extending trains beyond stations which originally run between stations based on origination-destination demand, and this resulted in empty seats in the first leg and last leg. The discount of 10 per cent to 30 per cent would reduce the fare box collections for IR as the discount may not increase the number of passengers in the first and last leg.

The seventh proposal is that railways go for premium charges (10 per cent to 20 per cent additional) for peak days and festival seasons. During peak demand period, private airlines and omni buses have already been fleecing passengers and passengers are extremely annoyed about this. As per human psychology, people remember even a single raw deal that they are forced to meet with the service provider than the discounts they enjoyed many a time with the same service provider. So, even those who avail reduced pricing due to one or other dynamic pricing proposal will not be kind to the premium charges for peak days and festival seasons, however low the premium charges are.

In a nutshell, dynamic pricing proposals require a thorough brainstorming on the part of Indian Railways on how people perceive each proposal of dynamic pricing that too during the last year of dispensation. Any foolhardy decision may not augur well for the current dispensation and it may be a better idea to wait till 2019 general elections to enforce any fare hike.

The author is a consultant and researcher and may be reached at ramakrishnan@iima.ac.in