The incident took place around 11 pm yesterday when the train was on its way to Bhubaneswar from Jagdalpur. 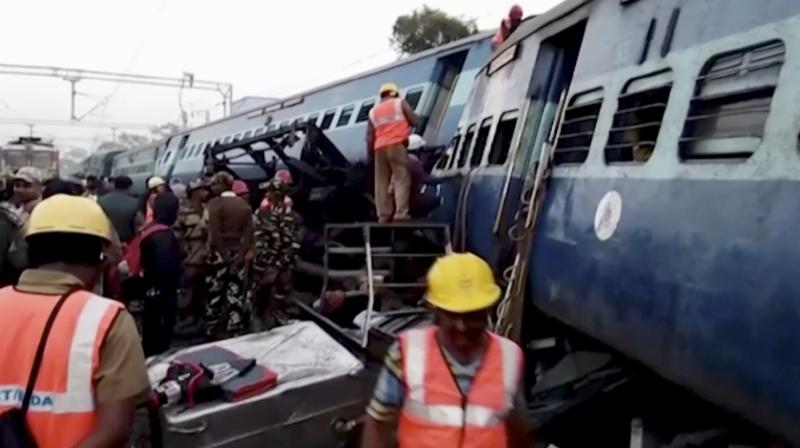 Rayagada: The death toll in the derailment of Jadgadalpur-Hirakhand Express at Koneru in Andhra Pradesh’s Vizianagaram district on Sunday rose to 39.

Nine coaches of the 22-coach Hirakhand Express were seriously damaged when the train, at about 11 pm on Saturday, derailed and hit a stationary goods train standing on the adjacent track at Koneru, nearly 27 km from Odisha’s Rayagada railway station.

At 3.25 am on Sunday, the 12 unaffected coaches of the train carrying the unharmed passengers left for Bhubaneswar by Sambalpur-Angul road.

According to East Coast Railway (ECoR) authorities, the Railways have also tied up with Parvatipur bus depot manager for five buses. Also, five additional buses have been kept ready at both Palkonda and Rayagada bus depots.

As many as 60 injured passengers have been admitted in hospitals in Visakhapatnam and Parvatiparam in Andhra Pradesh and Rayagada in Odisha.

Taking cognisance, Railway minister Suresh Prabhu has ordered a probe into the accident.

Lingaraj Parida, nodal officer of ODRAF teams said the rescue persons were working hard to retrieve the bodies and injured passengers from the affected coaches.

Prabhu also announced Rs 2 lakh ex-gratia each for the next of the kin of the deceased and Rs 50,000 and Rs 25,000 each for seriously and partially injured persons respectively.

In addition to this, Andhra Pradesh chief minister Chandrababu Naidu announced an ex-gratia of Rs 5 lakh to the families of victims from the state.

The derailed coaches include one Second AC, one Third AC, two sleeper coaches. Reports also said that the engine and luggage van of train also went off the tracks.

General Manager of East Coast Railway Umesh Singh has left for the accident site to take stock of the situation.

According to East Coast Railway authorities, at least four relief vans have been sent to the spot.