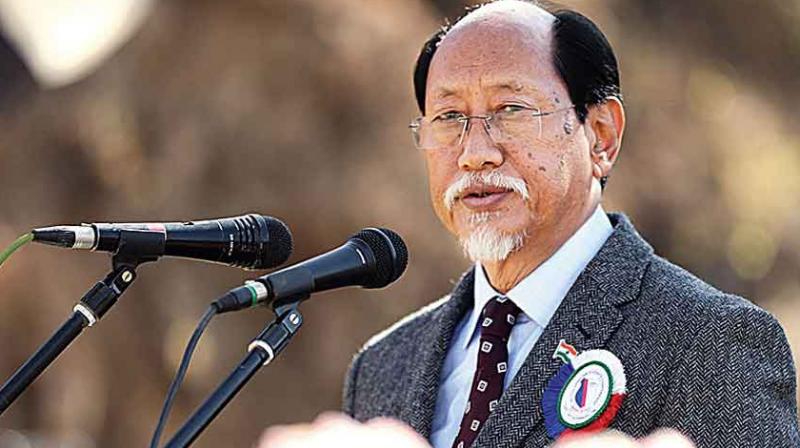 Kohima: Nagaland Chief Minister Neiphiu Rio on Monday said for the last 20 years the state government has been recommending that Armed Forces Special Powers Act (AFSPA) be removed and Nagaland taken off the list of areas declared "disturbed areas."

Rio asserted this while moving a resolution demanding that the Government of India repeal the AFSPA from the Northeast in the state assembly which was unanimously adopted.

The chief minister said that in view of the improved situation in Nagaland, the State Government has been consistently taking the stand that Nagaland should not be declared a 'disturbed area'.

This has been our stand for more than 20 years, he said, adding that the declaration of a state or any area as 'disturbed area' under Section 3 of the AFSPA is made by the Centre generally for a period of six months only at a time.

On the eve of expiry of the 6-month period, the Government of India seeks views and comments from the State Government. Every time, we have been taking the same stand, that there is no need or justification for extending the declaration of Nagaland as a disturbed area, he said.

Nonetheless, the Chief Minister lamented that objections of the state government are ignored every time and the declaration is renewed "again and again".

Pointing out that the current declaration of Nagaland as 'Disturbed Area' is going to expire by the end of this month, Rio hoped that this time the Central Government will heed Nagaland's plea and desist from extending it any more.

The resolution against AFSPA came in the aftermath of the killing of 14 civilians by security forces, including six in a botched anti-terrorist operation, and eight others in subsequent incidents in Mon district on December 4 and 5.

Rio pointed out that AFSPA was in force only in a few northeastern states and in Jammu & Kashmir but not in Maoist's affected states, where the Central government relies on State police forces and central police to deal with the situation.

AFSPA was enacted by Parliament in 1958 in order to give the Indian Security Forces special powers to deal with Naga armed insurgency.

The resolution passed by the Nagaland legislature on Monday vehemently condemned the massacre that took place in Oting - Tiru village area in Mon District on 4th December, 2021 in the indiscriminate firing by the 21 Para Special Forces of the Indian Army in which 13 innocent people were killed, followed by killing of one innocent person by security forces at Mon town on 5th December 2021, and injuring of 35 persons during the incidents.

The House demanded an apology from the appropriate authority, and an assurance that justice will be delivered by applying the laws of the land upon those who perpetrated the "inhuman massacre and upon those who are responsible for the incidents".

It was for the third time in little over six years that the Nagaland Assembly passed a resolution for the repeal of the AFSPA, which gives sweeping powers to detain and arrest people without a warrant in areas designated as "disturbed". It had earlier adopted similar resolutions on March 3, 1971 and July 27, 2015.