The Congress wanted police to register a case against Karnataka minister C T Ravi and take him into custody. 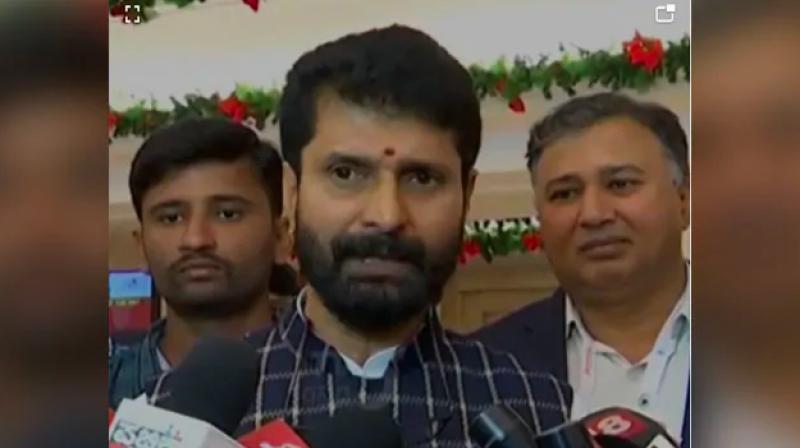 Ravi, the tourism minister, purportedly made the statement while responding to a question by reporters supposedly on Wednesday regarding Congress MLA U T Khader’s recent statement that Karnataka will “blow up in cinders” if the Citizenship Amendment Act is implemented. (Photo: File)

Bengaluru: Karnataka minister C T Ravi courted controversy with a video of him purportedly saying that a Godhra-like situation may arise if the majority community loses its patience, drawing a strong reaction from the Congress which has described it “provocative.” The congress wanted police to register a case against him and take him into custody.

“Most intimidating provocative threat issued by CT Ravi. The police must immediately book a case against him and take him into preventive custody. Holding a constitutional post, he has no business to speak like this,” senior Congress leader Dinesh Gundu Rao tweeted, sharing the video.

Ravi, the tourism minister, purportedly made the statement while responding to a question by reporters supposedly on Wednesday regarding Congress MLA U T Khader’s recent statement that Karnataka will “blow up in cinders” if the Citizenship Amendment Act is implemented.

“It is this mindset (referring to Khader statement) that set fire to a train in Godhra and the people of this mindset are the ones who burnt Karsevaks alive, we know this. If there is a reaction- hope Khader has seen what happened, when people reacted with rage as soon as the train was set afire in Godhra. If he has forgotten, let him recollect it once,” Ravi purportedly says in the footage.

“Just because the majority community here is patient, you are trying to put fire everywhere. If they too are enraged and if the limit of their patience is breached, what happens thereafter- you need to look back once,” he allegedly said.
“Our patience is not our weakness,” he reportedly added.

Khader had recently claimed that the state would “blow up in cinders” if the B S Yediyurappa government tried to implement the Citizenship Amendment Act (CAA).

Another Congress leader and former Chief Minister Siddaramaiah too referred to the video while attacking the ruling BJP in Karnataka and accusing it of inciting violence for political gains.