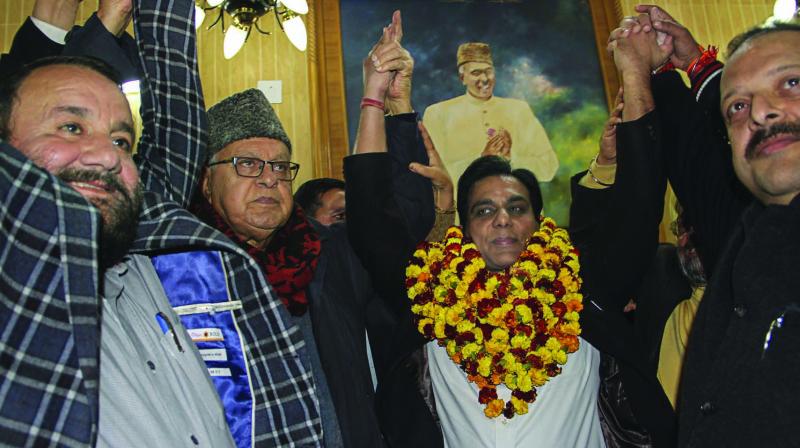 Srinagar: Former Jammu and Kashmir chief minister and National Conference (NC) president Farooq Abdullah on Thursday said that if voted to power with an absolute majority in coming elections, its government will grant regional autonomy to the State’s all regions within 30 days.

“I make a promise that within 30 days of being voted to power with absolute majority, we will give regional autonomy to the State. It is a matter which is close to people’s heart,” he said at an event in winter capital Jammu organised by the NC to welcome expelled former BJP MLA Gagan Bhagat into the party. He added, “With almighty’s blessing, I am in good health and I will see it become a reality within my time.”

Elaborating, Mr. Abdullah said, “The roadmap in this regard has been drawn between 1996 and 2002 and the larger objective of regional autonomy will be politico-economic empowerment of all the regions of the State”. He asserted that J&K is a unique state that needs special dispensation in terms of autonomy to different regions to satiate urges and aspirations of the people.

He said a major ground work has been done in this regard with avowed objective of empowering the people at grass roots level and enabling them to take decisions as per their regional priorities. “The regional autonomy document is ready. We need to just make some tertiary improvement in it so that every area gets its representation. Such a mechanism under overall superintendence of the State government will further strengthen the regional unity, which is imperative for singular entity of Jammu and Kashmir”, he said.

The J&K Assembly had on June 26, 2000, when Mr. Abdullah was the chief minister of the state, adopted by voice vote a resolution accepting the report of the State Autonomy Committee (SAC) which recommended greater autonomy to the state. The SAC report had also recommended sweeping changes in Centre-state relations.

The autonomy resolution was, however, not accepted by the then NDA government led by Prime Minister Atal Bihari Vajpayee.

The BJP was first to react to Mr. Abdullah’s statement. Senior party leader and former deputy chief minister Kavinmder Gupta said, “Farooq Abdullah should stop daydreaming. There’s is nothing like autonomy. Talking about so-called autonomy is but anti-national.”

Appreciating Mr. Bhagat’s joining the NC, Mr. Abdullah exuded confidence that the people, especially those in political arena, will work towards maintaining the singular entity of J&K which, he said, is under severe threat from “polarizing agents”. He said, “Peace and amity have to be strengthened at every level and this can be ensured only by strong National Conference, which is a mass movement”.