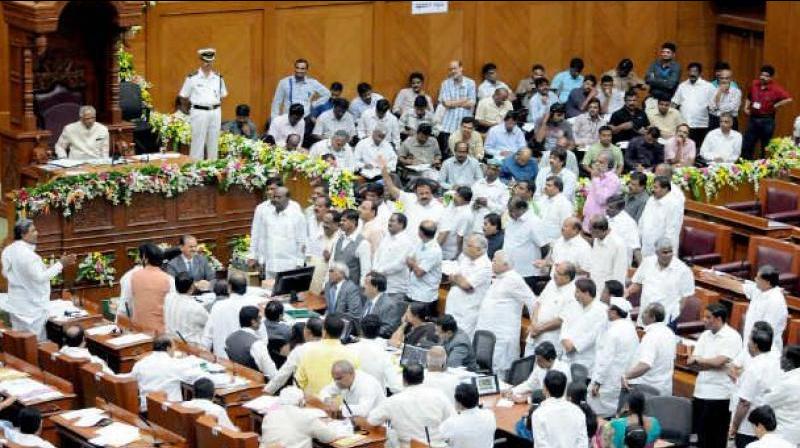 BJP members squatted in the Well of the House, shouting slogans such as ‘down down to the anti-farmer government’, ‘loan waiver should be implemented’. (Representational Image)

Belagavi: The Karnataka legislative assembly was adjourned sine die on Friday amid pandemonium as BJP members continued with their protest from the Well, seeking clarity from the government on the farm loan waiver scheme.

BJP members also demanded that Chief Minister H D Kumaraswamy apologise to Leader of Opposition B S Yeddyurappa for his comments against the former chief minister during the debate.

As the House met for the day, BJP members squatted in the Well of the House, shouting slogans such as "down down to the anti-farmer government", "loan waiver should be implemented".

However, amidst the din, the assembly passed three bills, following which Speaker Ramesh Kumar adjourned the House sine die.

The bills that were passed on Friday include, The Karnataka Legislature (Prevention of Disqualification) (Amendment) Bill, 2018, aimed at making provision to exempt the post of political secretary to the chief minister from incurring disqualification for being a member of the assembly or council, when he is appointed to the post.

Also passed was the Karnataka Civil Service (Procedure for Selection of Candidates during Recruitment) Bill, 2018, that provides for restoring a rule, wherein candidates belonging to reserved category securing high marks in KPSC exams would find themselves in the general merit list besides enjoying reservation benefits they are entitled to.

It was aimed at circumventing a High Court order that quashed the rule. The BJP has been protesting from the Well since Wednesday evening seeking clarity from Kumaraswamy on loan waiver and the exact day by which debt-free certificates would be issued to the farmers.

They also wanted him to apologise to Yeddyurappa for accusing him of "colluding" with nationalised banks, who are now non-committal on their earlier one-time settlement offer to NPA accounts. Kumaraswamy on Thursday had said he would not apologise as demanded by the BJP.

After the session, Speaker Ramesh Kumar told reporters that extra care was given to certain issues with respect to facilities provided to officials and public representatives during their stay in Belagavi.

He said, "We are not happy about huge money that was spent last time, so we tried curtailing on it while not compromising on quality."

"Compared to last year, we have been able to reduce the spending by about Rs 8 crore-10 crore this time.... last year according to information that I have, it had gone up to Rs 20 crore-22 crore," he said.

The speaker said he was "pained", as special discussion on issues relating to North Karnataka region, on transporting of sand, among other important things, could not be discussed due to ruckus, and had "personal regret" for it.

He also noted that attendance of MLAs during the session has "by far improved" this time.

Belagavi in north Karnataka, bordering Mahrarashtra has been hosting legislature session once a year since 2006 when the move was initiated by the JD(S)-BJP coalition government, with Kumaraswamy as its chief Minister.