45 Cavalry’s CO, Col. Sidhu saw death at close quarters when his tank came under fire from the enemy forces. 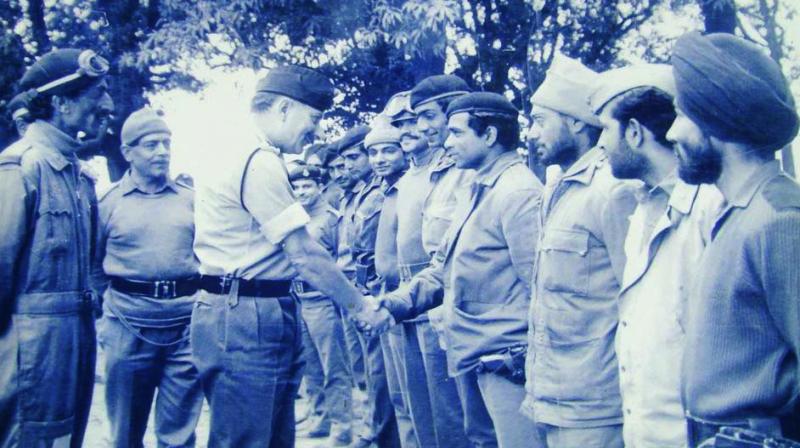 During the run-up to the 1971 India-Pakistan war, after one of the many operational conferences held in 4th Horse (also known as Hodson’s Horse), Maj. S.J. (later Lt. Col.) “Jiti” Chaudhary, C Squadron commander, declared that he would consider “being at war” only when a tank of Hodson’s Horse stood on Pakistani soil and fired a round from its 20 pounder gun and that he would then concede a bottle of Scotch to any person taking him on for a bet. On December 5-6, 1971 moments before this regiment’s B Squadron crossed the international border, its commander, then Maj. (later Brig.) Jasbir “Jas” Hundal called Jiti on the radio: “Jas to Jiti… standby… (in the background)… sabot 800, on tank, fire (boom), main gun destroyed enemy OP (observation post) tower… Over.” Jiti responded: “Jiti to Jas okay... okay… stop rubbing it in… you’ll get your bottle!” This is the regiment which led the advance into Pakistan across the Basantar river, known as Degh Nadi in Pakistan and remained in the lead till the end of the 13-day war. Destroying disproportionately large number of Pakistan armoured corps’ then quite new Patton tanks with World War II vintage Centurions, the CO, Lt. Col. (later Lt. Gen.) R.M. Vohra, was awarded Maha Vir Chakra (MVC), majors Govind Singh, Kamal Nanda and Jiti Chaudhary were awarded Vir Chakra (VrC). Jas Hundal was short-changed by being awarded Sena Medal (SM), because the infantry company commander fighting alongside his squadron, Maj. (later Col.) Hoshiar Singh, 3 Grenadiers, got one of the two Param Vir Chakra (PVC) of that war.

Maj. (later Brig.) Amarjit Singh Bal was commanding a squadron of 17th Horse (Poona Horse), which was to establish and defend a secure bridgehead on the Basantar river in Shakargarh area. Located at Jarpal, overlooking the river, his squadron was most vulnerable to enemy attack. Despite heavy shelling by Pakistan artillery and repeated counter-attacks while being heavily outnumbered for over two days, Maj. Bal was able to inspire his men to repel, destroying as many as 27 Pakistani Patton tanks. Maj. Bal was awarded the MVC.

Another officer of the Poona Horse and the youngest to get the PVC — posthumously — was Arun Khetarpal, whose role in the Battle of Basantar did not end with this 13-day war, resulting in the demise of East Pakistan and the creation of the newly-liberated Bangladesh. Maj. Khwaja Mohammad Nasir, the squadron commander of Pakistan Army’s 13 Lancers fighting against Poona Horse, who came bandaged the next day to collect the dead bodies of his fallen comrades, wanted to know more about “the officer, who stood like an insurmountable rock” and whose troop of three Centurion tanks was responsible for decimation of his entire squadron of 14 Patton tanks. His bandages were owing to injuries sustained by him in the final engagement of his and Khetarpal’s tank. 13 Lancers is the same regiment which exchanged its Sikh squadron with the Muslim squadron of Poona Horse during Partition in 1947.

Nasir’s tribute to Khetarpal did not end in the battlefield in December 1971. Arun’s father, Brig. (retd) Madan Khetarpal, residing with his wife Maheshwari in New Delhi, had for long nursed a desire to visit his hometown Sargodha, Pakistan. Speaking to this writer, he mentioned that in 2001 when he founded his old friend, retired Lt. Gen. Kirpal Singh Randhawa of 7 Cavalry, who after retiring had visited Pakistan a number of times, took his passport and brought it back a few days later with the Pakistan visa stamped on it. Not only that, he had also arranged with his Lahore’s Aitchison College-mate, the same Khwaja Mohammad Nasir, by then a brigadier and manager of Pakistan’s cricket team to host Brig. Khetarpal. During this visit, Nasir hesitatingly admitted that he was the one at whose hands Arun got killed. “…he (Arun) was singularly responsible for our failure. He was a very brave boy…” said Nasir to the senior Khetarpal, who even in his sorrow, stoically remained the “officer and a gentleman”. 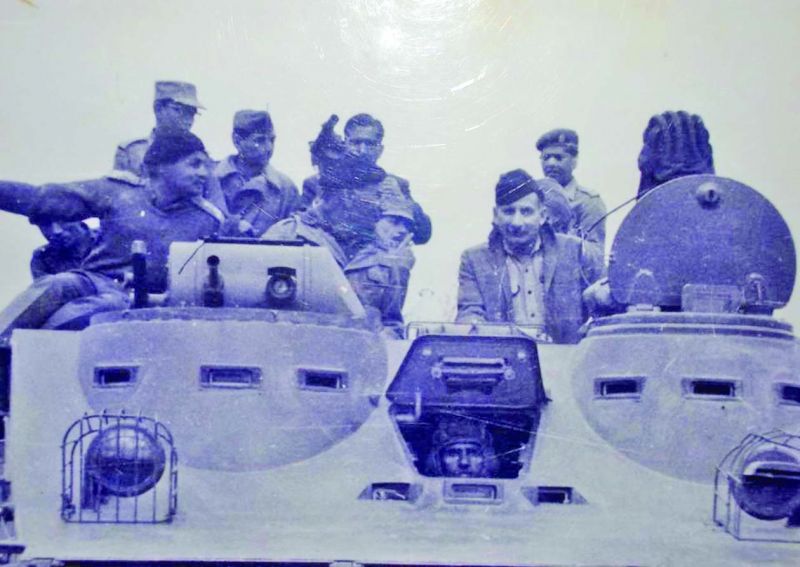 Gen. Sam Manekshaw on a tank in the Western Theatre in the 1971 war.

Lt. Col. (later Brig.) Sukhjit Singh was commanding 14 Horse (Scinde Horse), which was deployed in Shakargarh. On the night of December 8, the regiment crossed into enemy territory and established itself near Nainakot. On December 10, Pakistan forces launched a powerful armoured attack which the regiment resisted determinedly. Leading from the front, Sukhjit directed his tanks with great skill and courage. The enemy having lost one of its tanks retreated. The next day Sukhjit led an operation to capture enemy tanks at Malakpur under heavy artillery and mortar fire. Unruffled, he surged ahead and in the ensuing engagement eight tanks and some Pakistani officers were captured. Sukhjit was awarded the MVC for his inspirational leadership.

Eastern Theatre
Interestingly, the war in the Eastern sector began on November 20, 1971. In the Eastern sector there were three-plus regiments — 45 Cavalry, 69th Armoured Regiment (both holding Soviet Russian amphibious PT 76 tanks), 63 Cavalry and 7 Cavalry’s independent squadron. 45 Cavalry’s tanks crossed the Kabadak river under heavy enemy fire which they returned while afloat and along with the other mentioned armoured units hastened the end of war by destroying Pakistan’s armoured regiments. Pakistani troops vented out their frustration by mutilating Lt. Chandavarkar, the youngest of 45 Cavalry officers. Unfortunate to be caught by the enemy, he was tied to a tree and for each question that was not answered, he lost a limb or an organ. The Pakistani JCO in charge chopped off his ear lobes, fingernails, toes and fingers, and finally gouged out his eyes before shooting him in the chest.

45 Cavalry’s CO, Col. Sidhu saw death at close quarters when his tank came under fire from the enemy forces. “One of the enemy tanks opened fire and shot me as well as my tank. My gunner died. The rest of the crew came out and started crawling back to our positions. I waved a white handkerchief at our own infantry while crawling back so that they don’t shoot me. I had around 200 splinters in my leg and could not walk. My face was absolutely white,” he recalled. Brig. Balram Mehta, author of The Burning Chaffees wrote: “When the word came that our Squadron Commander Maj. Narag was martyred, my tank’s gun started malfunctioning and could not fire... And then suddenly, three Chaffee tanks came in front of us. We ultimately destroyed one of them and saw its driver coming out. My gunner asked my permission to fire (at him). But I didn’t let him do it. When he was later brought as a prisoner of war, he thanked us for the cup of tea.”