'What have Cong, JMM done for poor?,' Amit Shah at J'khand rally

Shah addressed issues like, Ayodhya verdict, Article 370, budget in Jharkhand in the rally. 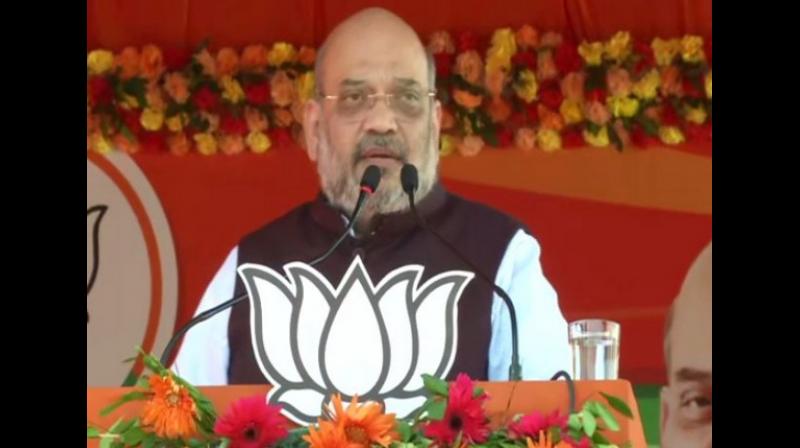 'In the last 5 years, Chief Minister Raghubar Das has put Jharkhand on the path of development. What have Congress and Jharkhand Mukti Morcha done for the benefit of the poor? Rs 1,000 crore scams took place during their government,' Shah said. (Photo: ANI)

Latehar: Addressing a rally for the upcoming Jharkhand polls here, Union Home Minister Amit Shah on Thursday attacked the Congress government and Jharkhand Mukti Morcha (JMM) and highlighted BJP's schemes which were implemented in the state during its regime in the past 5 years.

Shah reminded that it was only because of Atal Bihari Vajpayee's decision that the state exists.

"People of Jharkhand fought the battle for statehood. In Congress' rule, Jharkhand was not created. Jharkhand came when Atal Bihari Vajpayee became Prime Minister of this country. He gave the Jharkhand people their right," the BJP president said.

He further said that scams of Rs 1,000 crore took place during Congress' and JMM's rule in Jharkhand.

"In the last 5 years, Chief Minister Raghubar Das has put Jharkhand on the path of development. What have Congress and Jharkhand Mukti Morcha done for the benefit of the poor? Rs 1,000 crore scams took place during their government," Shah said.

He said that Jharkhand was on the path of development and progress and he was satisfied to see the ruling BJP accomplish its goals in the past 5 years.

Shah said, "Our government provided gas cylinders to 35 lakh people, houses to more than 5 lakh people and ensured that toilets and drinking water reach to every house in Jharkhand."

"We constructed a memorial to honour Birsa Munda and sanctioned the degree college in 2018. The income of female peasant was increased under the Jharkhand State Tribal Promotion Society. A 554 km route made at Manika Vidhan Sabha at a cost of Rs 300 crore," he said.

Shah also mentioned SC's Ayodhya verdict of November 9 which allotted the disputed site to Ram Janmabhoomi Nyas giving an additional 5 acres for building of a mosque.

He accused the Congress party of not allowing the continuous hearing in the Ram Mandir-Babri Masjid case.

"Should a Ram temple be built in Ayodhya or not? But the Congress party was not letting the case be heard continuously. Now, the Supreme Court has delivered a historic verdict paving way for a grand Ram temple in Ayodhya."

Talking about the revocation of Article 370 in Jammu and Kashmir, Shah said, "Congress party had been dragging the Kashmir problem for 70 years in the greed of its vote bank. However, Prime Minister Narendra Modi removed the stigma of Article 370, bringing the Kashmir Valley on the path of development."

The BJP chief also compared the budget allocated by the Congress and the BJP government during their rule in Jharkhand.

Jharkhand will go to polls in five phases.

The Congress has forged an alliance with the Jharkhand Mukti Morcha (JMM) and the Rashtriya Janata Dal (RJD) in the state to defeat the incumbent BJP.

In 2014, the BJP, which won 43 seats, formed the government along with the All Jharkhand Students' Union (AJSU), which had won five seats under the leadership of Raghubar Das, the present chief minister.

(with inputs from ANI)