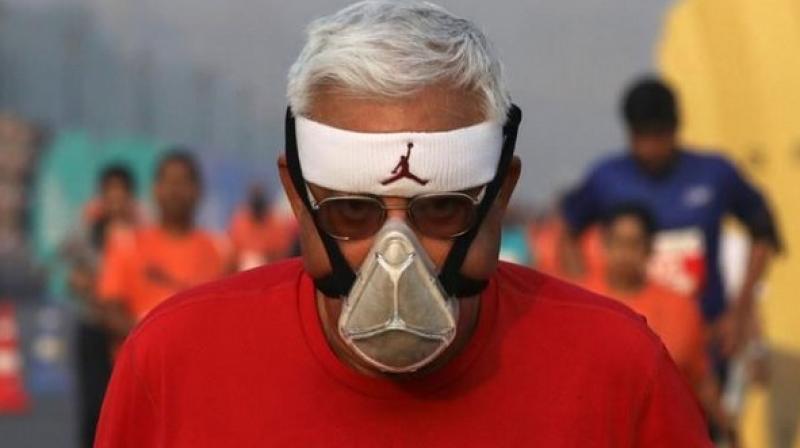 The increase in the toxic air in and around Delhi is causing problems for the residents, making them fall into a pit of lung-related diseases and also cardiovascular diseases. (Photo: ANI)

New Delhi: The air quality in Delhi and its adjoining areas such as Gurgaon, Noida, Ghaziabad and Faridabad again plunged to 'very poor' category on Thursday and is expected to fall into 'severe' category by Friday, said System of Air Quality and Weather Forecasting And Research (SAFAR).

"The overall Delhi AQI is in the very poor category and is slowly declining and may further deteriorate by tomorrow towards the higher end of the very poor scale and may touch 'severe' in some parts of Delhi by November 22," stated the organisation in its advisory.

According to the weatherman, this condition is predicted mainly due to two factors working adversely- first, the surface winds in Delhi are likely to be calm (ventilation coefficient below 1000 m2/s) preventing dispersion and second fire counts have increased significantly to ~1000 (as per SAFAR multi-satellite product) as compared to last week and the fact that stubble level winds are from burning site but with slower speed, it will bring moderate impact of ~14 per cent today.

However, transport-level winds are likely to be highly variable in direction and may fluctuate between Easterly to Northerly and may not bring significant stubble impact to Delhi tomorrow.

The increase in the toxic air in and around Delhi is causing problems for the residents, making them fall into a pit of lung-related diseases and also cardiovascular diseases.

"The pollution level in Delhi which use to be around 100-200 is reaching to 600 levels on AQI. It is very dangerous for people. It is increasing cardiovascular diseases along with lung-related diseases. People having chronic diseases and bronchitis asthma are the worst hit," said Manoj Kumar, Director of the Department of Cardiology at a private hospital.

During winter season each year, most of northern India suffers from a spike in toxicity in the air due to the change in weather patterns and crop residue burning in the neighbouring states of Haryana, Punjab and Uttar Pradesh.

Not only that, but a dip in temperature along with low wind speed also tends to trap air pollutants closer to the ground.