Javadekar lauds role of cinema in growth of nation’s culture. 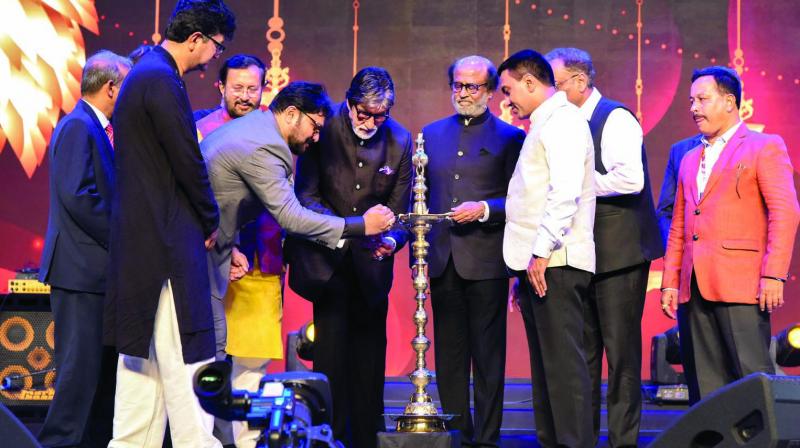 I&B minister Prakash Javadekar, superstars Amitabh Bachchan and Rajinikanth light the ceremonial lamp at the opening of the 50th edition of the Iffi. (Photo: PTI)

Panjim: With the promise of establishing a single window clearance system for promotion of foreign film shooting in the country, the 50th International Film Festival of India (Iffi) began in Panjim on Wednesday amid a glittering ceremony attended by legends from the film industry. The day also saw the festival celebrate the contribution of cine legends Amitabh Bachchan and Rajnikanth.

Speaking on the occasion, Union information and broadcasting minister Prakash Javadekar lauded the role of Indian cinema fraternity in the growth of country’s culture. “For promotion of the film industry we will soon establish a single window system to allow easier clearances to film makers from abroad to shoot in India,” Mr Javadekar added.

Pointing towards a new feature introduced in this year’s Iffi, Mr Javadekar said that films with special narrations will be screened for the visually-impaired. He called on the industry to emulate this feature so as to enhance its reach and involve this section of society in the total film viewing experience.

Hindi film legend and superstar Amitabh Bachchan, also known as Big B, was honoured as a chief guest. A visibly emotional Amitabh thanked his fans for their continued support through his good and bad times. South Indian film legend Rajnikanth received the Icon of the Golden Jubilee. As the two icons were honoured on stage, the entire Shyama Prasad Mukherjee Stadium was on its feet to cheer them on.

Speaking on the occasion, Rajnikanth said “Amitabh Bachchanji is my inspiration” and dedicated his award to all his directors, producers, technicians and fans.