'We could suffer huge loss if Muslims don't vote for us': Kamal Nath in video

In video, Kamal Nath was heard saying that the Congress will be doomed if Muslims don't vote for it en masse. 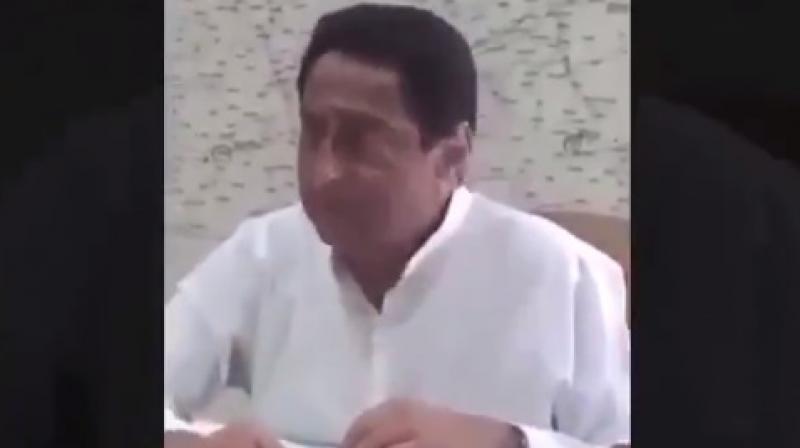 In the video, Congress leader Kamal Nath said that if the Congress does not get at least 90 per cent of the Muslim votes, it will be a 'huge loss'. (Photo: Twitter Screengrab | @amitmalviya)

New Delhi: In the run-up to the Madhya Pradesh Assembly election, a controversial video purportedly showing Congress leader Kamal Nath talking about the importance of Muslim votes for the party has gone viral.

In the video, apparently during a close-door meeting, Nath was heard saying that the Congress will be doomed if Muslims don't vote for it en masse.

The Asian Age does not vouch for the authenticity of the video doing rounds in social media in which Kamal Nath appears to be addressing party men and urging them to ensure Muslim votes.

In the sensational video Kamal Nath, the nine-time Lok Sabha MP of the Congress from Chhindwara, is heard stressing on the need to study the polling percentage in Muslim majority booths in the previous state assembly elections and find out the reason as to why Muslims did not come to exercise their franchise.

Kamal Nath said that if the Congress does not get at least 90 per cent of the Muslim votes, it will be a “huge loss”.

"My request to you is to analyse past records… How much voting in Muslim booths, and if at some booth the polling was 50-60 per cent, we need to find out why was there a dip in voting. This post-mortem is very important," Nath said adding, "We need not 80 per cent, but 90 per cent of Muslims to come out and vote."

"If 90 per cent Muslims don't vote for us, we could suffer a huge loss, we will be doomed," the Congress leader said.

The Congress, out of power in Madhya Pradesh since 2003, sees a good chance of ousting the BJP in the November 28 election, after its 15 years in power. The BJP, however, believes it can swing a fourth term despite anti-incumbency, mainly because of the infighting and factionalism in the Congress.

BJP's Amit Malviya tweeted the video and called it the "communal truth of the Congress's politics".

A delegation of BJP leaders approached the Election Commission against the video. They requested EC to take legal action against Congress for violating model code of conduct and for inciting religious and sentiments by appealing to a particular religious community.

Polling for 231 Madhya Pradesh Assembly seats will be held on November 28.