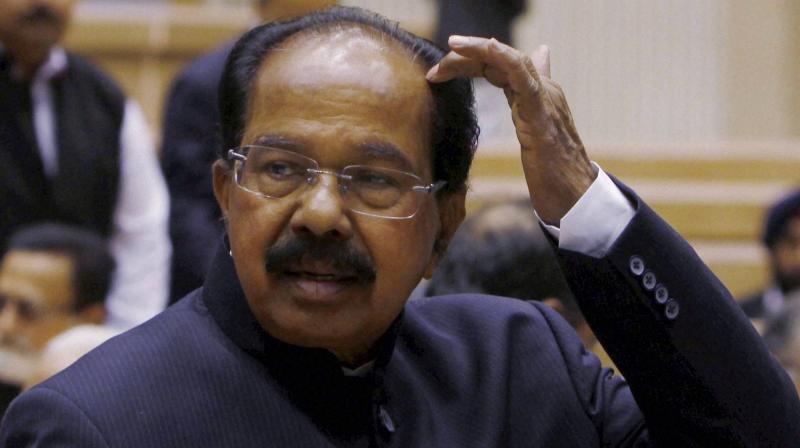 Veerappa Moily, on the campaign trail in Telangana, said the Congress was gaining ground at the national level, while the BJP-led NDA was losing partners. (Photo: File | PTI)

The former Karnataka chief minister, on the campaign trail in Telangana, also said the Congress was gaining ground at the national level, while the BJP-led NDA was losing partners. "I don't want to say that.... the question is that ultimately he (Rahul Gandhi) is the best material for the prime minister," he told PTI when asked whether the proposed anti-BJP coalition will project Rahul Gandhi as its leader.

Quoting Naidu as having said that the Congress is the "mentor" in the larger context of unity among opposition parties, Moily noted, "That's how things are shaping up".

The former Union minister said there will be a consolidation of opposition parties against the NDA at the national level. He asserted that the Congress was likely to win the elections in all the five states--Madhya Pradesh, Rajasthan, Telangana, Chhattisgarh and Mizoram--where the poll process was underway.

"Things are shaping up so well, evolving so well, the opposition unity is becoming a reality, and the Congress party is picking up in all the five states... (there's) likelihood of coming to power. Definitely, it adds up to the credibility of our leader Rahul Gandhi," he said.

Moily was dismissive about scepticism over the success of a broad-based opposition alliance with the possibility of partners squabbling on the issue of who would be the prime minister. "All that is not correct. Everybody is united against (PM) Narendra Modi, the present BJP regime. When it comes to unity against (PM) Narendra Modi and NDA, all parties are united and that is important," he said.