Punjab CM said that one attacker has been arrested and the second identified and will be caught soon. 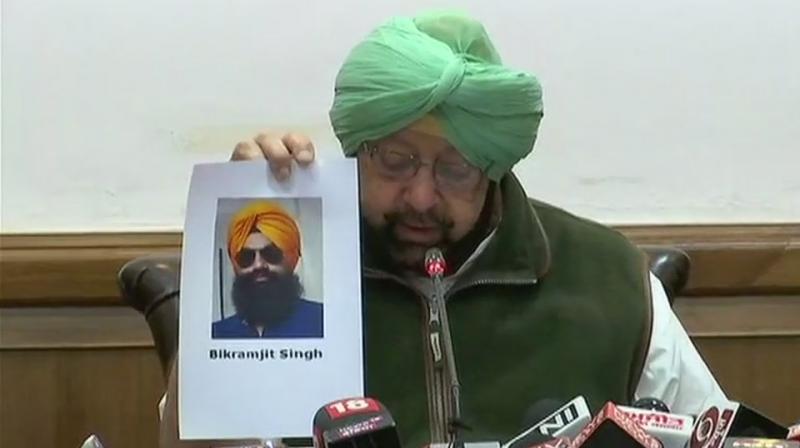 CM Amarinder Singh holds up a picture of 26-year-old Bikramjit Singh who has been arrested. (Photo: ANI/Twitter)

Chandigarh: Punjab Chief Minister Captain Amarinder Singh on Wednesday said that the grenade used in Sunday's attack on a prayer meeting of the Nirankari sect in Amritsar was made under license by Pakistan ordinance factory and was filled with pellets.

The Punjab CM also confirmed that one of the two attackers involved in the grenade attack has been arrested while the second attacker has been identified and will be arrested soon.

"The person who is the mastermind is Inter-Services Intelligence (ISI). These are only touts which they were using," Amarinder Singh said.

"This is the type of grenade which has been taken from other modules. This is the one being used against forces in Kashmir and this is the one that burst. This one is made under license by Pakistan ordinance factory and is filled with pellets," Amarinder Singh told at a press conference on Wednesday.

"I'm happy to announce that police nabbed one of the two attackers involved. 26-year-old Bikramjit Singh has been arrested. The other man will also be arrested soon. His name is Avtar Singh," he added.

"There is no communal angle. It's a pure case of terrorism. They were targeted as they were easy targets. We had information in the past about other organisations being targeted but we took precautionary measures and prevented that," the Punjab Chief Minister said.

Three people died and 20 others were injured when two motorcycle-borne youth threw a grenade at a religious congregation in Adliwal village in Rajasansi area, about 15 km from Amritsar.

Victims were followers of the sect from nearby villages and had gathered for the weekly religious meeting.