India   All India  21 Nov 2018  Congress party is like 'barat' without a groom, says Rajnath Singh
India, All India

Congress party is like 'barat' without a groom, says Rajnath Singh

Singh said that the election manifesto of the Congress proved that they have not even partially fulfilled the promises they had made. 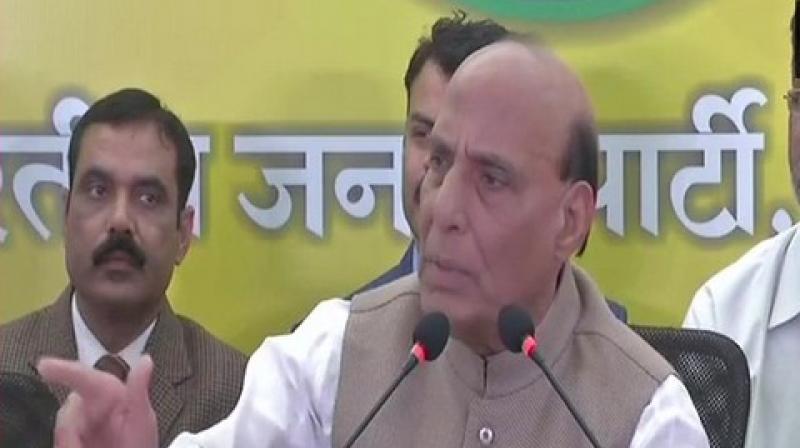 Alleging that Congress promises were like 'post-dated cheque', Singh said that party manifesto has nothing new and is just a repetition of its earlier manifesto. (Photo: ANI)

Bhopal: Union Home Minister Rajnath Singh took a jibe at the Congress on Wednesday by equating the party with a procession of marriage without the groom.

"More precisely, the Congress party is like a 'Barat' without a groom," Singh said at a press conference in poll-bound Madhya Pradesh, adding that the party is leaderless and lacks command structure.

Rubbishing the idea of having any sort of alliance with other political parties, the Home Minister expressed confidence that the BJP will return to power in all the three poll-bound states Madhya Pradesh, Chhattisgarh and Rajasthan with a clear majority.

Claiming that local Congress leaders in the state of Madhya Pradesh are often seen projecting themselves as a chief ministerial candidate, Singh pointed out that it only reflected that the Congress is leaderless and lacks command structure.

Praising the NDA regime at the Centre, the Home minister asserted that the "Acche Din" already exists in the country and it is only a perception problem of those who don't appreciate it. He also touched upon the state of the country's economy, saying that it has progressed in an unprecedented manner under the present regime and if the same growth rate continues then India will stand among top three economies of the world by 2033.

"The Congress party has systematically ruined the economy of the country and states over the years during their regime whereas we have given a tremendous boost to the economy. Though no political party or government is perfect, our party is run by an ideology and political thought, and if our growth rate continues like this, India will stand among top three economies of the world by 2033," said Rajnath.

Holding the Congress responsible for "credibility crisis" in politics currently, Singh said that the election manifesto of the Congress proved that they have not even partially fulfilled the promises they had made.

Alleging that Congress party's promises were like "post-dated cheque", Singh said that the party manifesto has nothing new and is just a repetition of its earlier manifesto. The manifesto was a repeat perhaps since the party did not even partially fulfill the election promises, he added.

Even the promise on loan waiver, Singh claimed that the rival party's promise remained only on books. He praised the Shivraj Singh Chauhan government for its unparallel schemes and unprecedented development work.

On the issue of Ram Mandir, the Home Minister said that everyone will be happy if the Temple is constructed. He, however, emphasised that it should be made in a conducive environment.

He brushed aside questions related to the Central Bureau of Investigation (CBI) row, saying that the whole matter is sub judice and hence he cannot comment on it.